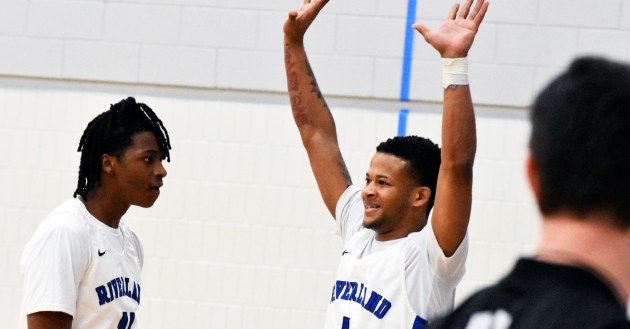 Riverland’s Trayvon Smith and Junior Stone celebrate a dunk by Stone as the No. 1 Blue Devils beat Western Tech earlier this year. The Blue Devils advanced to the National Tournament and will be the No. 1 seed, the first time in school history. Herald file photo 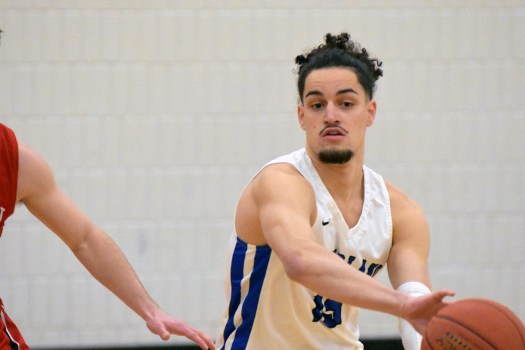 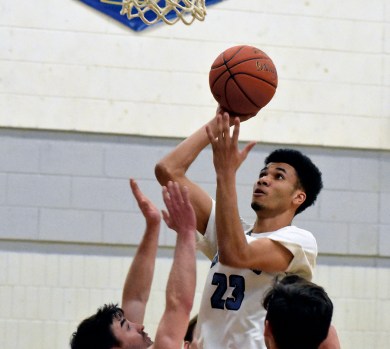 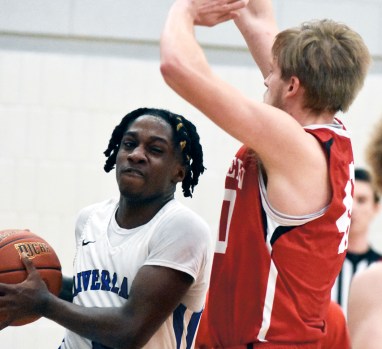 The No. 1 ranked Blue Devils men’s basketball team is putting the finishing touches on one of its best seasons in school history and Riverland showed why it has been so successful as it pounded Western Tech 114-66 in Riverland Gym Wednesday night.

The Blue Devils (24-1 overall) have now won 12 in a row and amassed 32 assists against Western Tech (8-17 overall). No Blue Devil scored more than 13 points in the win as all 13 players scored — with five reaching double figures.

“When the ball moves, as skilled as some of these guys are, it looks really good,” RCC head coach Derek Hahn said. “These guys are buying in and the defensive effort is there. We’ve had good teams in the past, but they’ve just never bonded like this group as a collective five on the court with the athleticism that we have.”

Cleveland Bedgood scored RCC’s first 11 points to give his team an 11-4 lead. He finished the game with 13 points, four rebounds and two assists in 14 minutes of action.

“We always come out with energy. We feel like our bench players feed off of the starters,” Bedgood said. “Everybody’s together and everybody’s on the same page. We just go out there and hoop, and do our thing. We just have to bring the same mindset to the playoffs.”

Dominik Bangu added nine points and seven rebounds for the Blue Devils. While he was sitting on the bench, he was one of the many RCC players cheering on his teammates. That’s the way it has been all year and that’s how the Blue Devils have surged to their best ranking in school history.

“This season has meant everything to us. We’ve been working every day and we’re trying to win every time we take the court,” Bangu said. “We all care about each others’ success and we all want each other to succeed.”

RCC, which has now won three of the last four conference titles, will compete in the NJCAA Division III Regional Tournament at the end of next week. If the Blue Devils can win three in a row, they’ll be headed to the national tournament. If they drop a game, they’ll have to hope for an at-large bid.

“I talked to the guys about my experience with the baseball team,” Hahn said. “They roll out the red carpet for you and I want these guys to experience that. They’ve worked extremely hard and they’ve put in hours in the gym. It’s incredible.”