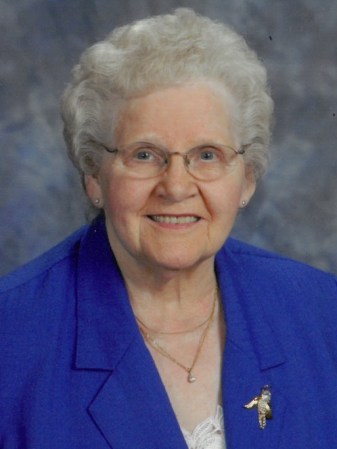 Sylvia J. Swenson, age 93, of Blooming Prairie, Minnesota, passed away Saturday, February 19, 2022, at Prairie Manor Care Center in Blooming Prairie. Sylvia Josephine Williamson was born to Joseph and Selma (Lee) Williamson on March 6, 1928, in Udolpho Township, Mower County, Minnesota. She was baptized at St. Olaf Lutheran Church in Austin, Minnesota and confirmed at Red Oak Grove Lutheran Church in rural Austin. Sylvia attended country school. On October 27, 1946, she was united in marriage to Clayton R. Swenson at the First Lutheran Church in Blooming Prairie. Their union was blessed with five children, two daughters and three sons. Together the couple enjoyed spending time with family, creating and painting woodcrafts, and attending their grandchildren’s games. Over the years Sylvia worked as a nanny in her teen years, later as a salesclerk at JCPenney in Austin and Oleson Dry Goods in Blooming Prairie. Clayton and Sylvia then owned and operated Blooming Prairie Feed Service. She became a nurse’s aide at Prairie Manor Care Center for 13 years after selling the feed store. Sylvia worked at Harriet’s Dres-Wel until retiring. She was a member of First Lutheran Church and Ladies Organization. Sylvia also belonged to the Homemaker’s Club. She will be greatly missed by all who knew and loved her.