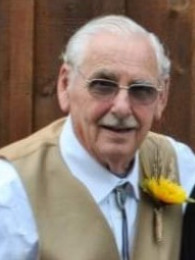 Robert J. Auer, age 86, of Austin, passed away on Wednesday, February 16, 2022, peacefully at his home with family by his side.

Bob’s life was full of many adventures. One of the most special events of his life was his marriage to Thelma Bruner on June 30, 1956. Their 64 years of marriage was nothing short of an amazing adventure.

Bob joined the United States Army from 1953-1956. We have heard many stories of this time in his life. After his time in the service, Bob and Thelma moved to St. Louis, Missouri where he worked for Dow Chemical. Later, moving to Austin, Minnesota where he worked for Eddy Paper Company (now known as International Paper). Bob also enjoyed 25 years with Austin Park and Recreation and retired in 1990. He met many people during his time there and touched many lives.

Bob and Thelma had three children. They took them on various trips which included camping, fishing and traveling to many states. When they had the opportunity to include their grandchildren in on their adventures, they were happy to do so. They both had so much love for their family.

Bob was an extraordinary man with many stories to tell of his life adventures. He has touched countless lives in his 86 years, he will be missed by many.

He is preceded in death by his parents, Robert and Albina Auer; wife, Thelma Auer; sister, Barbara Coggins.

A gathering to remember Bob will be held from 1-4 pm on Saturday, February 26, 2022 at Mayer Funeral Home.