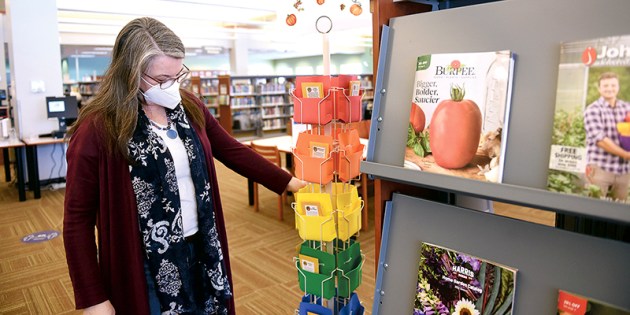 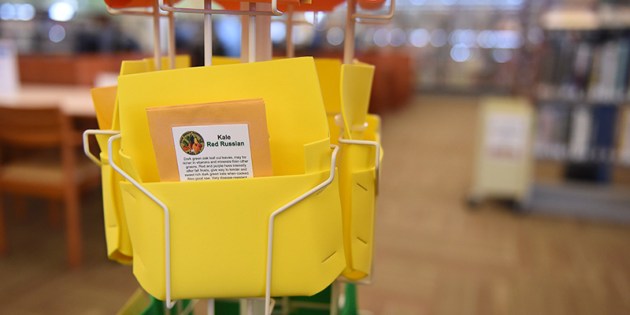 Seeds are organized into packets for easy selection. Eric Johnson/eric.johnson@austindailyherald.com 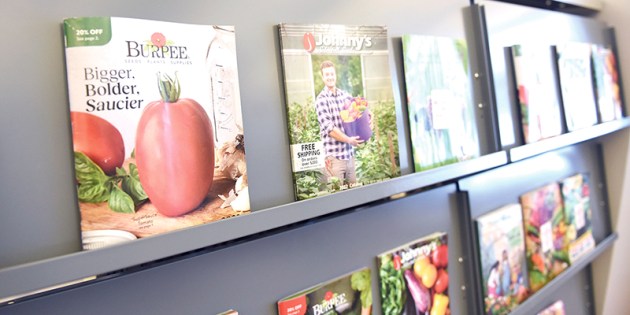 Seed library opens up possibilities for your own backyard garden

It’s the heart of February, and as the month is known to do, it’s left us gripped in the cold. Yet, at the Austin Public Library there is a sense of spring in the air.

A new program at the library, featuring a joint collaboration with Austin’s Master Gardeners and Horticultural Club, is making it possible for people to check out seeds to create their own gardening experience this summer.

It comes with the hope that in the future, this seed library will work a lot like a regular library. People will check out seeds and then in the fall, returned them through an effort of drying and preserving seeds from the plants they grow.

“We’re always trying to bring the community into the library,” said Director Julie Clinefelter. “One of the biggest things we look at is for programming ideas. Looking for people in the community interested in bring those in.”

Toward the back of the library, interested gardeners will find a rotating rack filled with packets of seeds next to a shelf filled with written materials that can further aid those looking to grow their own food.

“We have a long history of gardening classes here at the library,” Clinefelter said.

Seed libraries have gradually become more in fashion within libraries, providing a beginners level entry into growing one’s own food.

It’s something that’s been on the mind of Adult Services Librarian Courtney Wyant for awhile now, who herself has always been fascinated with gardening.

“I’ve grown up in Austin and was a city 4-Her,” Wyant said. “I would do gardening because mom started doing it. I always really loved gardening and I’ve been wanting to start a seed library forever.”

Just last year Wyant and the library got the opening they were looking for when the Horticultural Society reached out to the library. Through their connections the club was able to procure bulk seed orders and were interested in starting a seed library in Austin.

The original idea was to pair the seed library with in-house classes, but with COVID-19 still driving the narrative, those classes had to be postponed, with the intention of lining them up later on down the line.

“It’s kind of coming together now,” Wyant said. “We’ve got some classes lined up.”

It fell to the Horticultural Club to organize the seeds. Master Gardner Don Smith estimated they had put together over 600 packages of seeds.

“We’ve got some seeds that are native plants,” Smith said. “There will be some flower seeds as well. What we’re hoping for is that people who are new to gardening will come in and pick up some sample seeds for them to try to see whether or not they like to garden.”

The club has a variety of avenues they can pull seeds from, including Iowa as well as through the State Horticultural Society.

“If a child wants to start a garden, they can check them out and see how they grow,” Smith said. “It’s a great learning experience.”

It’s a learning experience that also holds possibilities down the road to continue restocking the library through the harvesting of seeds.

The concept is that gardeners will eventually be able to gather the seeds from the plants, dry them properly and then bring them back to the library for others to check out.

It’s tricky, but could pay dividends for a self-sustaining program within the library.

“On some of the seeds there’s a learning curve,” Smith said. “We don’t necessarily encourage them, but if they want to bring the seeds back in their welcome to. We would rather them try the seeds and begin to learn how to garden.”

Wyant echoed that sentiment, saying that the process of returning seeds is still a ways down the road.

“I would like to see it done, but I think it takes a little more time in education,” she said. “I think it’s important that we show people how to collect it. We just want to get people familiar with the basics of it.”

All of it taken together is an opportunity for something greater. Not only can people learn about seeds and gardening, they get an opportunity to experience a little more of the world around them.