Austin freshman Kiki Rodriguez is not short on confidence when she steps into her floor routine and that’s one of the reasons that she became Austin’s first Section 1A floor champ since her assistant coach Maddie Mullenbach did so in 2015.

Rodriguez put up a solid score of 9.5 on the floor last weekend in Winona and she’ll be heading to the state meet for the first time along with her teammates Reese Norton, a freshman, and junior Hannah Fritz.

“I knew I had a chance to do well at sections, but I’m not trying to be cocky,” Rodriguez said. “There is still a lot of work to do on my routine.”

Austin’s trio of state qualifiers will compete in the Class A Individual Meet in Roy Wilkens Auditorium at 6 p.m. Saturday. 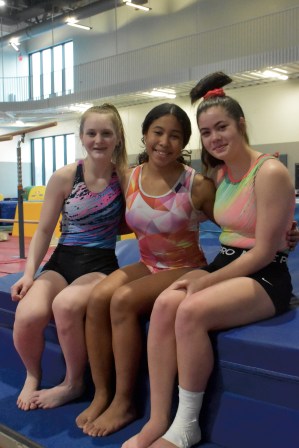 From left, Austin’s Reese Norton, Kiki Rodriguez and Hannah Fritz will all compete in the Class A gymnastics meet on Saturday. Rocky Huln/sports@austindailyherald.com

Fritz will compete in the vault and beam and Norton will compete on the floor. It’s been a long road for Fritz, who was injured last season after nearly making it to state in her eighth grade and ninth grade seasons.

“I was really motivated this year to try harder and make everything perfect,” Fritz said. “This year it all came together. It feels good to go with my teammates and I wouldn’t want to go to state with anyone else.”

Norton has learned a lot while working next to Rodriguez in the gym. She gets plenty of pointers and plenty of motivation.

“Kiki helped me a lot. I’ve gotten ten times better from last year,” Norton said. “Going to state is a great opportunity for us.”

Rodriguez has been in gymnastics since she was three years old. Her inspiration came from a television show called “Make it or Break It” that ran from 2009-2012. The show featured a girl who dreamed of becoming an Olympic gymnast.

“I was watching that show and I told my mom to sign me up for gymnastics,” Rodriguez said.