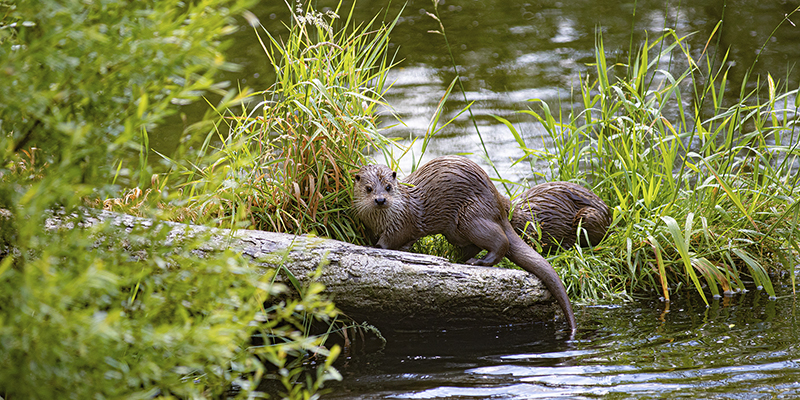 I was leaning on the faux marble countertop in my kitchen waiting for water to boil when my 12-year-old asked me: “If you could relive any day without changing anything, what day would you pick?” The steam started leaking out of the kettle, and I didn’t even mull it over.

I said: “Do you remember the day we went to Root River, and I let you and your friend swim in your t-shirts? We didn’t have towels, I had lost the sole of my boot, and we were sticky with the hot, damp air? You were both laughing at your luck: swimming in your clothes. I was sitting on the rocky shore, leaning on our packs. Just watching. That’s when I glanced it. Movement. Behind you. My eyes briefly flicked to the bluff behind. An otter was scaling the rocks. I looked to you both, wanting to see if you noticed. I felt a shout build in my throat, but my mouth was locked shut. I didn’t want to break this moment: your laughter. The otter. The river. The sun.”

That day the otter disappeared into the vegetation with only myself as witness, but that moment has stuck with me subsequently. River otters are native to all of Minnesota, but disappeared for almost a century due to their dense fur being highly desirable during the fur trade in the early 1800s. Thanks to some repopulation efforts, today you can find these goofballs in our southern Minnesota wetlands that provide them with a source of food, burrowing opportunities, and bank vegetation.

For river otters, the mating season typically starts in March and April. After mating, the fertilized egg goes through a process called “delayed implantation.” This means that the development of the embryo ceases for nine to 10 months! After this period of time passes the fertilized egg is implanted, and development begins. The kits are then born the next year, typically from March to May.

A female river otter can have up to five kits, with two being typical. Kits are born blind, fairly helpless, and need to be raised in a safe den. An otter den, or burrow, can be inside hollow logs or built into the bank. Otters also use abandoned burrows, like beaver lodges, for their own.

River otters are both predators and prey. They catch and kill a variety of small aquatic animals like fish, mussels, and turtles. They can even catch small terrestrial mammals like mice and chipmunks. There aren’t many predators that can catch an otter when it’s in the water, but on land predators like bobcats, coyotes, and wolves will sometimes hunt and kill river otters.

River otters are playful and charismatic. They love to wrestle with one another, and slide down muddy or snow-packed river banks. They play games with sticks, nudging them across the water. They’ll drop pebbles into the water just to go and retrieve them, or bounce them from hand-to-hand as though they’re juggling. Some people have even observed them playing games of tag!

My two girls never noticed the spirited creature bounding up the bluffs at Root River. They laughed and splashed while I delayed our departure, committing to memory the haven of that space. If I could relive any day to live exactly as it was, it would be that one. A day I shared with my daughter, her friend, and the otter.

March at the Nature Center