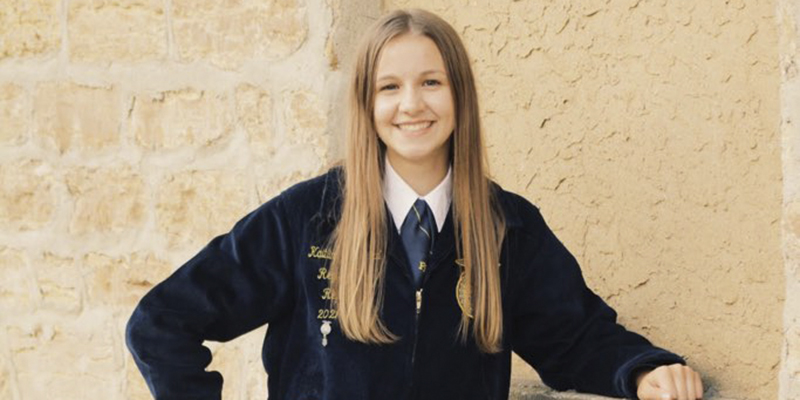 Kaitlin Meiergerd has taken an active leadership role during her time in FFA. Photos provided

Editor’s note: National FFA Week is February 19-26. This year the Austin Daily Herald has featured one of the rising stars in state FFA.

Meiergerd delves into leadership in FFA

There was a time that the current Region 8 FFA reporter wasn’t going to be a part of Future Farmers of America (FFA), however, Kaitlin Meiergerd decided not only was she going to join FFA, she was going to go even further.

Meiergerd is part of a family with a rich history in farming that carries through her own siblings. She grew up on a farm in northeast Nebraska before her family moved to Austin.

She had an appreciation for the agricultural background of her family, but had doubts that she would enter FFA like her siblings. 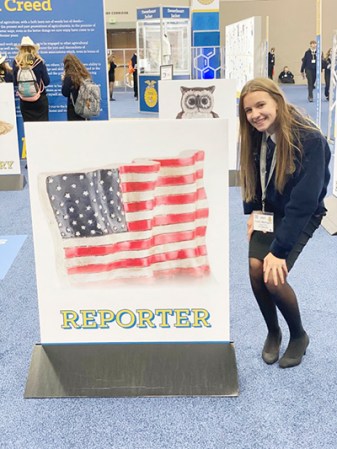 Meiergerd’s first foray into leadership was as Region 8 reporter. In March she will take over the Region 8 president position. Photo provided

“My freshman year I didn’t want to have anything to do with [FFA],” Meiergerd said. “But it has become something I’m very passionate about.”

It was that growing passion that pushed her to take more of an active role in FFA. Meiergerd looked to her older brother, who was a chapter officer, and decided she liked the idea, only on a bigger scale.

“Last year I decided to apply for a regional office,” she said. “It’s taking that next step to the level of leadership to reach more people and then take my leadership to the next level.”

Meiergerd is currently the reporter for Region 8, which covers chapters in southeastern Minnesota. Her job includes spreading the word on a variety of activities and topics within Region 8, including camps and workshops.

But she’s not done. In March she will be sworn in as Region 8 president, a post she is excited to be tackling.

“I’m looking forward to starting again with a new team,” Meiergerd said. “Obviously, it will be different from the first experience, which had some great memories, but I’m excited to make new memories.”

In many ways, being a part of FFA has been life-changing for Meiergerd. It’s been an opportunity to not only develop her own skills, but remain in touch with those aspects of her life that have been so ingrained with her from the start.

“FFA stands for Future Farmers of America, but for me it’s a lot more than that,” Meiergerd said. “It’s a way to get back to my roots and relate it to something I grew up with. It allows me to be surrounded by people who grew up the same way I did.”

Many of the skills Meiergerd has learned will lend themselves to her time as Region 8 president as well as her life after FFA. Those are skills that transcend the agricultural background of FFA.

Austin High School FFA advisor Nick Schiltz has been keenly aware of the skills Meiergerd has attained over the years.

Meiergerd said that her time in FFA has helped grow her skills that will become translated to life after high school. Photo provided

“Kaitlin is a remarkable student who has excelled at many levels of FFA,”Schiltz said. “She is the epitome of what an FFA [student] can and will become with tireless effort and devotion. Her experiences in FFA will help her succeed glowingly in her future pursuits.”

While many will continue to find paths to professions in agriculture, many others will not, but in Meiergerd’s mind it doesn’t matter. Though currently undecided as to her future path, she recognizes that the skills learned through FFA can apply to anything.

“I’m not set on what I want to do in the future,” she confirmed. “There’s also a lot of kids that may not go into farming or agribusiness. I’m thinking about going into the medical field, but those skills still help me with all of the aspects in the medical field.”

In particular, Meiergerd has enjoyed the benefits of leadership and communicating with others. This skills building has been improved with her dual involvement in the Mower CEO Program, which walks participants through the process of creating their own business.

For Meiergerd, who already had a business model of photographing high school seniors with their animals, it was a natural transition.

The experience for the junior, who recently open enrolled to Hayfield, has been transformative.

“It’s shaped my whole life and whole high school career,” Meiergerd said. “I would be a totally different person if I didn’t follow my siblings into FFA.”

It’s not lost on those that have worked with Meiergerd.

“Over the last couple years, I have watched Kaitlin evolve into a remarkable young lady. I remember pushing her to apply for a Region 8 position, as I saw the potential in her abilities,” said AHS’ other advisor Kim Schechinger. “Only to find out later she was doubting if she should even apply right up to her interview time. Kaitlin has a passion for agriculture, and the drive of a natural born leader.”