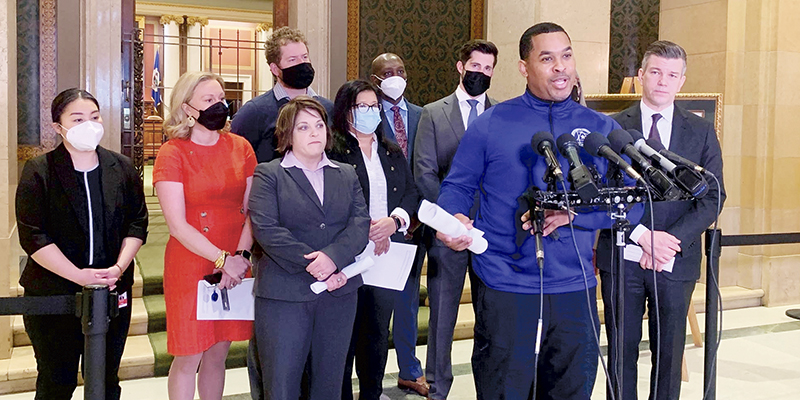 Police recruitment bills are under serious consideration at the Minnesota Capitol amid a debate over how much to provide to would-be officers and what expectations the state should set in return.

The overlapping priorities won’t guarantee that the DFL-led House and Republican-led Senate will reach agreement on a plan to send to Democratic Gov. Tim Walz. But the prospects are enhanced, given that leadership in both chambers is pushing for incentives.

House DFL leaders added their plan to the mix Monday. The bill would authorize expedited training programs, signing and retention bonuses, tuition help and other job placement assistance for would-be officers. It was set for an initial hearing Tuesday, but the hearing was cancelled Monday night.

Senate Republicans have been advancing similar ideas and have already passed a bill to conduct a marketing campaign to get people to consider policing.

Bonuses for new officers who stick around a certain amount of time could reach $10,000.

Minnesota faces a severe crunch when it comes to filling law enforcement jobs.

Assistant Public Safety Commissioner Booker T. Hodges said a quarter of the law enforcement agencies in the state have openings. He said there are 1,200 to 1,500 jobs to fill but that new classes of officers per year are a third that size.

“At our current vacancy rate right now, it’s going to take three years to fill those jobs,” said Hodges, who is leaving his state role soon to become Bloomington’s police chief. “That’s not including the 10 percent to 5 percent of the people that are at or near retirement age. So you can see the magnitude of this problem.”

House Majority Leader Ryan Winkler, who took the lead in presenting the DFL proposal, said it would come with added vetting to make sure new recruits have a strong moral character and a service mindset.

“Every police department, every sheriff’s office makes their own assessment of individual officers,” Winkler said. “What we’re trying to do is not change the way each police department operates, but to provide a pipeline of candidates that fit these criteria so that they have a better option to choose from.”

It’s also a nod to concerns within Winkler’s DFL caucus that is leery about spending considerably more on law enforcement after some high-profile deadly encounters involving police.

But that may not have been enough. Winkler’s news conference to release the legislation did not include House public safety committee chair Carlos Mariani, DFL-St. Paul, who told the Minnesota Reformer he had not been consulted on the bill.

Senate Public Safety Committee Chair Warren Limmer, R-Maple Grove, said the search for the perfect candidates could get in the way of quickly filling vacancies.

“We want the best police officer we can find. But we also have to be realistic. If they’re looking for perfection, they’re not going to find it,” Limmer said. “That’s where training and good leadership also has to be added to that list of perfection. And that’s really what we’re looking for is a whole compendium of quality for law enforcement.”

Final legislation might not take shape until May, which means deployment of new officers are many months and perhaps even years off. Winkler said it demonstrates that money alone won’t solve current problems.

“The stark reality is in many of our communities, we are going to have to figure out how to create community public safety with the number of officers we have right now, for a period of time that will probably be longer than a lot of people will feel comfortable with,” Winkler said.

Defense in Floyd’s killing: Officer spoke up, was ignored