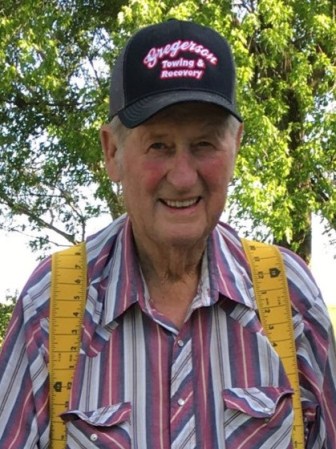 Lyle E. Julson, 78, of Grand Meadow, MN, died on the morning of Thursday, February 24, 2022, right before chore time between one quiet breath and another.

He was born to Elgar and Virginia (Wadsworth) Julson at his family farm in Clayton Township. He was the last survivor of brothers Erland, Roger, Milo, Rolland, and Kenny, and three sisters Evelyn, Hazel, and Doris.

Lyle was a farmer through and through, although he worked at Osmundson Brothers Quarry as drill operator and demolition for 33 years. Our whole farm is tied together with discarded dynamite wire. Handy stuff.

He worked as a truck driver- learning from the Legendaries; Bill Jones, Fran Stier, and Bob Whiteaker, hauling sugar beets, cattle, peas and corn, milk and crushed rock. He continued his “education” with 2 years in the U.S. Army serving at Fort Leonard Wood, Missouri and Fort Sill, Oklahoma. He served doing transportation, moving troops and equipment. He was a 50 year member of the Grand Meadow American Legion and believed strongly in honoring veterans in the Honor Guard and setting up flags for Memorial Day and at the local cemeteries.

It was at the time he was working for Lanny Jacobson at the gas station in 1972, when he married Robbie Gregerson. They just celebrated their 50th wedding anniversary. The sun and moon rose and set on his girls Dina and Jessie. When they brought Brian Nelson and Tim Leader into the family, he considered those “other animals” as he called them, his right hand men.

Lyle was a fierce defender of the underdog, detested bullies, considered a schedule and job list irritating to the point of ignoring. And that schedule included shaving.

Lyle retired from Osmundson Brothers to dedicate himself to his bachelor brothers, caring for them through sickness to the end. Bill Jones said you could ask Lyle to do a job for you as a favor, leave for 10 years, come back and he would still be doing that favor for you. He missed his brothers so much, visiting around the table as they always did.

Lyle and Robbie raised sheep for 48 years, although she suspected chores were his excuse to get out of going anywhere. Home was where it was at for Lyle.

Heaven for Lyle will be any time his family is all together, an 80 acre field to plow, and a farm show every summer weekend.

Julson Family Motto: “We’ll get by.”

All of Lyle’s nieces and nephews knew they were his favorite. He built a remarkable bond with Max and was busy teaching then all of his bad habits.