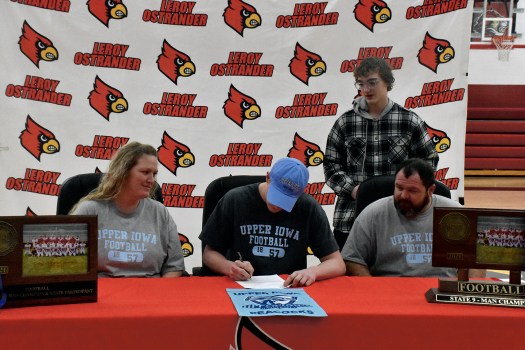 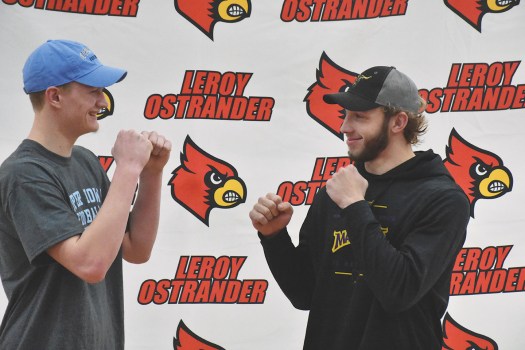 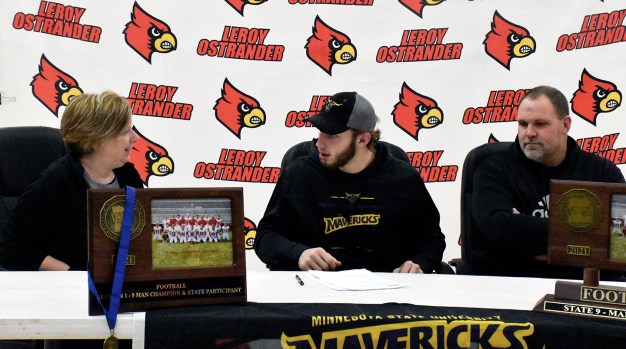 LeRoy-Ostrander senior Riley Olosn signs his national-letter-of-intent to play footall at Minnesota State University in Mankato next to his parents Dayne and Kari. Rocky Hulne/sports@austindailyherald.com

LEROY — LeRoy-Ostrander seniors Tanner Olson and Gavin Sweeney have been lining up near each other on the football field for most of their lives and it was fitting that the dynamic duo from the Cardinals’ first ever state championship team was standing side-by-side on the day they cemented their college futures.

“Tanner’s always been the guy that’s right there with me and I’ve always been there with him. He drives me to be better and I do the same for him,” Sweeney said. “This means a lot to me. I feel like our whole team worked hard, but all of us put in our separate work to get to where we are. I’m excited for it.”

Olson, who had 137 tackles and 15 sacks this fall, is projected to be a middle linebacker with the Mavericks and Sweeney, who had 113 tackles and eight sacks last season, isn’t sure if he’ll be an offensive or defensive linemen with the Peacocks.

Olson is hoping that he can line up on the opposite side of the ball against Sweeney in the future.

The Mavericks went 6-5 overall last season and the team features a pair of local grads in Blooming Prairie’s Gabe Hagen and Austin’s Oliver Andersen. Olson is pumped to go to a school where winning is expected.

“It’ll be nice having some people that I already know going there. They already have a solid team and a solid program,” Olson said.

The Peacocks went 1-10 overall last season, with a 58-0 loss to the Mavericks on Oct. 16. Sweeney is excited to play in a smaller town that feels like home to him.

“I’m going to try to stay confident and not get down on myself. There’s going to be natural talent everywhere, so I just have to use my special ability to play and go from there,” Sweeney said. “I feel really blessed to be able to get an opportunity like this. It doesn’t happen to everybody.”

The signing was a celebration for the Cardinals, who won their first ever state title this fall. L-O head coach Trevor Carrier said it was great to see the hard work of his players being rewarded.

“They were the cornerstone, along with Chase Johnson, of our state championship team,” Carrier said. “These two guys bookended a lot of things for us. They’re also awesome kids in the classroom. It will be fun to watch them play against each other.”