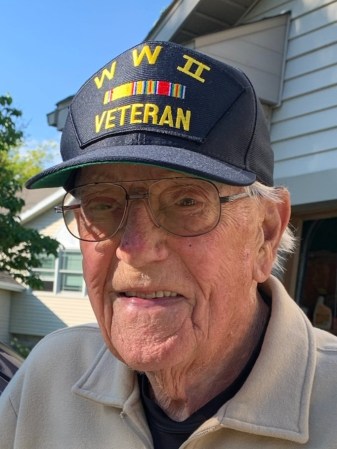 John A. Huber, 96, of Rochester, MN (formerly of Austin, MN) passed away peacefully at his home on Saturday, February 5, 2022 while under the loving care of his family and hospice.

John Anthony Huber was born January 22, 1926 in Austin, MN the son of Michael and Esther (Judd) Huber. He graduated from St. Augustine High School in 1944. He enlisted into the United States Navy and was stationed in Guam until he was honorably discharged. He returned to Austin and attended Austin Community College. John married Elizabeth “Betty” Weis on June 14, 1947 at St. Augustine Catholic Church in Austin. He worked for the George A. Hormel company for 45 years. Betty passed away on September 1, 1993 and John moved to Rochester, MN in 2001 to be close to family.

He enjoyed golfing, pheasant hunting, square dancing and spending time at the cabin on Beaver Lake. He played on several bowling leagues and was a member of the American Legion and the VFW. He was honored to be a recipient on the Honor Flight for WWII veterans on May 21, 2011. John’s faith and church were important. He attended Queen of Angels, St. Augustine Catholic Church and Pax Christi Catholic Church. He sang as a cantor and was a member of the Knights of Columbus.

He is preceded in death by his parents; wife, Betty Huber; brother, Gerald Huber; and sister, Vivian Dotzenrod.

A private funeral service was held at Pax Christi’s prayer chapel on February 11th. A Celebration of Life and graveside service at Calvary Cemetery in Austin with military honors will be held at a later date.

Ranfranz and Vine Funeral Home is honored to be serving the Huber family; share a special memory or condolence at  www.ranfranzandvinefh.com