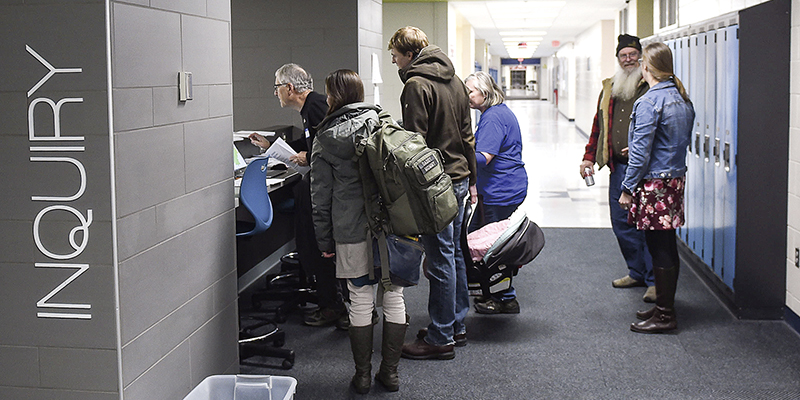 The two-fer might have notched Jensen as the frontrunner for the GOP nod to take on DFL Gov. Tim Walz.

Jensen won by a commanding margin among six Republicans listed on caucus ballots — taking 38 percent. Everyone else was bunched in the teens or below.

“Minnesotans are engaging and they’re saying we can’t keep doing what we’ve been doing,” Jensen said. “People see me as a person who is willing to speak for the common everyday person.”

State Sen. Paul Gazelka, the second-place finisher, said there’s still time before the Republican Party Convention in May to make the case that he, and not Jensen, is the best candidate.

“It’s going to be competitive. We’ll draw the distinctions,” Gazelka said. “He had a half a year to talk to people about defining me and now I will be able to define him. And in the end: May the best person win.”

Jensen said he expects to be on the receiving end of attacks.

“As a family doctor who has had a wonderful career of working with my patients, to be put in this situation where you are sort of hoping you might get the thick skin of an aardvark or an elephant, it’s hard,” he said.

The caucus was held on the same day as the release of initial campaign finance reports in the race.

Jensen posted a considerable advantage there, too, although he’s also been in the race far longer than his Republican rivals. He raised more than $1.2 million last year and had much of that in reserve.

Former Hennepin County Sheriff Rich Stanek launched his Republican campaign for governor on caucus day with a video stressing his public safety credentials and warning of a state in decline.

“I’m a lifelong conservative. I care about Minnesota and our future. We’re at a crossroads as a country and as a state,” Stanek said.

Still, totals for all of the Republicans combined were considerably less than Walz raised and the $3.6 million he had in the bank at the start of 2022.

Democrats held most of their caucuses in remote fashion and didn’t conduct a straw poll.

Among Republican caucus attendees, there was a mix of newcomers and veterans – and lots of discontent with Walz.

That was on display at a caucus at Stillwater’s high school, where state Sen. Karin Housley warmed up the crowd.

“We’re going to take that governor’s seat back,” she said to loud applause.

Denise Stephens was there. She said she wants a Republican governor who will oppose teaching mandates regarding gender identity. And she’s still mad about how Walz managed the COVID-19 crisis.

“Walz took emergency powers and shut down the entire state, drove our small business underground so we have no small business anymore,” Stephens said. “And then what it’s doing to our kids — keep bouncing them back and forth, in and out of schools, and causing them to lose whole years of learning.”

The straw poll winner isn’t an exact predictor of the eventual nominee. In three of the last four times the GOP had multiple contenders for party backing, somebody other than the preference ballot winner secured the nomination in the end.

And some caucus-goers said they’re not dug in yet.

Kristin Sullivan was drawn to her first caucus in Stillwater, angered over COVID restrictions.

“My number one thing is stopping Governor Walz,” Sullivan said. “My whole family thinks he’s evil and all my friends do, too, so I will do whatever I can do to stop him.”

All of the major Republican candidates say they’ll respect their party’s endorsement and leave the race if another candidate gets it, reducing the chances of a competitive August primary.

Their 40-minute gathering included discussion of a possible name change. But the caucus concluded without action.

One caucus attendee argued for a rebranding out of concern the party’s ballot line had been co-opted in the past and could harm the prospects for cannabis legalization.

But party member Paula Overby argued that the current name is an asset.

“The name itself is a powerful, powerful tool at the ballot box,” she said.

Legal Marijuana Now hopes to field candidates in all eight U.S. House races and put up candidates in legislative districts, too. The party won its major status through performance in prior statewide races.

“We, as a third party, are going to run candidates no matter what, somewhere,” party Chair Tim Davis said just before the caucus concluded.