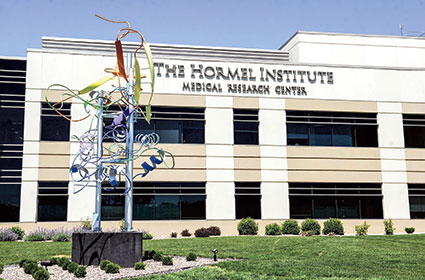 A paper from researchers at the Hormel Institute and Mayo Clinic identifies potential new mechanisms of action in the treatment of Cholangiocarcinoma, a form of liver cancer. The findings were published in Cell Reports by Ningling Kang, PhD, Associate Professor and leader of the Tumor Microenvironment and Metastasis lab at The Hormel Institute and Vijay Shah, MD, Carol M. Gatton Chairman of Medicine at Mayo Clinic.

“Our research found that PD-L1 promotes myofibroblastic activation of hepatic stellate cells by distinct mechanisms selective for TGF-β receptor I versus II,” Kang said. “We focused on cholangiocarcinoma, a lethal liver cancer, because it is often diagnosed at an advanced stage when it is incurable and it has a five-year survival rate of less than 10 percent.”

Kang said the current first-line treatment for advanced cholangiocarcinoma is gemcitabine/cisplatin, but the median overall survival rate is less than twelve months, suggesting a critical need to better understand its mechanisms in order to develop new treatments.

“Liver cancer is one of the top causes of death worldwide,” Shah said. “Our research identifies potential new mechanisms of action for an existing therapy that may open doors to other new therapies.”