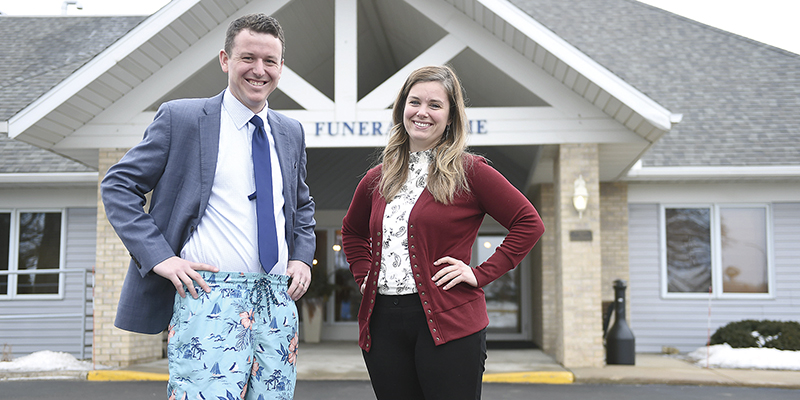 Tyler Hoff and McKenzie Mullen-Burkart of Worlein Funeral Home will be taking the frigid plunge at the Flunge in about a week and a half for the Children's Grief Connection. Eric Johnson/photodesk@austindailyherald.com

Worlein Funeral Director McKenzie Mullen-Burkart has an idea of what to expect from the prospect of jumping into an ice covered lake.

Even if she’s not completely sure what’s actually coming.

Mullen-Burkart, will be taking part in the Children’s Grief Connection’s 13th annual Frunge, along with Tyler Hoff, Worlein owner and funeral director, something Hoff jokingly referred to as being “roped in.”

The Frunge, a combination of the words Frigid, Frozen, Plunge, is an annual fundraiser not unlike Paint the Town Pink’s own Plunging for Pink  where participants jump into the frigid waters of Lake Waconia while raising money for a unique camp experience, free of charge, that helps children and their families cope with the stresses of losing a loved one.

“These kids, when they go to school every day, they’re seen as different because they’ve had this traumatic loss,” Hoff said. “They go to this camp where everybody is the same and it’s kind of enlightening how a kid can go from really wearing their grief on their sleeve every day to in just one weekend seeing all of their peers that are similar to them.”

Initially, the camp was just open to children, but soon those involved with the camp realized that an outlet was needed for the entire family to come together in order to heal together.

The weekend-long camp is run by volunteers and those within the funeral industry, who see the grief every day through their jobs. To be involved in some manner to help people get through their time of sorrow.

“There can’t be a downside for people who are experiencing the same thing you are,” Mullen-Burkart said. “You don’t have to feel ashamed or afraid to cry or afraid to laugh. There’s no right or wrong emotion to have at that time.”

Hoff has been involved in some fashion or another since Children’s Grief Connection started in 2001. His parents helped organize the Minnesota camps and as a youngster, he was a test camper.

Over the years, Hoff and other volunteers have taken part in the camps in order to help counsel people and provided that healing outreach.

“It’s a lot of fun, camp stuff to keep it fun and light,” Hoff said. “Then there are some small group sessions; six to 10 people per group that are all the same age or in a similar situation.”

“The final day, before they leave, is really cool,” Hoff continued. “They do a big sharing circle where they light a candle for each person. You get this big ring of people that are all sharing the same feelings.”

Hoff said the camps can be transformative and has taken part in four to five jumps into Lake Waconia himself in an effort to support the programing.

This year’s jump is on March 5, at Lola’s Lakehouse in Waconia. Hoff himself has set a goal of $8,000 while in total, the Frunge is hoping to hit the $100,000 mark. Hoff’s own daughter, Haddie, is nearly to her own goal of $500 and plans to take part in the Teddy Bear Frunge, which will see her and other children coast down an inflatable slide into a pool of teddy bears.

“It’s a fun day,” Hoff said, going on to explain how the funds help continue the important work Children’s Grief Connection does. “It gives hope and normalcy back to families that have been ripped apart by tragedy. It promotes more of a healthy lifestyle and mental health to get over what sometimes feels like an insurmountable loss.”

And if you need any more incentive, however, then Hoff has a deal for you.