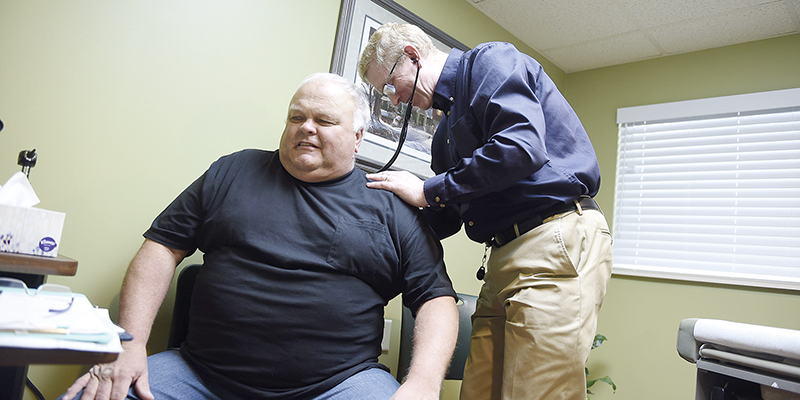 Dr. David Strobel checks over Jeff Helle during a visit to HELPCare Clinic Thursday morning. The new clinic with a cost-effective model, has recently opened in downtown Austin. Eric Johnson/photodesk@austindailyherald.com

A healthcare model, with touches of a hometown doctor’s visit, has set up shop in Austin.

HELPcare Clinic, located at 308 Fourth Avenue NW, is a unique approach to family medicine modeled off healthcare many private organizations sometimes provide to  its employees or members, but rooted in small-town family practices.

Instead of focusing on insurance-paid visits, HELPcare works on a subscription basis — either monthly or yearly — allowing families or individuals to pay up front without fear of further fees coming into play for follow-up visits.

HELPcare’s simple and homey layout hearkens back to the small-town clinic setting, with three exam rooms and a lab room, with space for more as the clinic works to get fully up to speed.

In fact, a Norman Rockwell painting, reflecting the family practice, hangs in the hallway next to a piece of artwork from the “Jetsons” cartoon. It mirrors the dichotomy of old and new medicine, ironically in a place that brings it all together under one roof.

“This is, I think, where COVID actually helped, because people got more accustomed to doing some of that stuff with remote care and video,” Aase said, while adding. “I think there’s still a hunger for that human relationship of human touch. I can talk to my doctor. That’s the other thing that’s going to be appealing. Not having to go through a big treatment triage to be able to talk to your doctor.”

The idea for HELPcare Clinic had its beginning in 2019, during a break for coffee with Dr. David Strobel, HELPcare’s first primary care doctor, currently seeing patients Thursday, Friday and Saturday mornings.

During the meeting. Strobel began telling Aase about his time at a clinic for the Pipe Trade Union in the Twin Cities, which treated members and their families in much the same way.

“They set this up several years ago as a thing to say, how about instead of giving the widow these good checks, how about if we help our guys stay around a little longer,’” Aase said. “Wouldn’t it be great to have something like that in Austin, that regular people could be part of?”

This cash-based system, while not covering large-scale issues such as broken bones and cancer, is able to provide a good majority of the day-to-day ailments and tests that most anybody would need.

Without revolving it around insurance, HELPcare is able to keep costs down while meeting family and individual needs.

“In most cases, once I pay my membership fee, that’s going to give me most of the care I need for most of my life,” Aase said. “We can do things like needing three or four stitches.”

Setting up HELPcare turned out to be a fairly speedy procedure as far as setting up a business goes. Aase started working at home, while with Mayo, in March of 2020, and during the time on nights and weekends, he pursued his MBA in health care management.

Aase said that in some ways the COVID-19 pandemic expedited the process as he was able to cut out a good amount of time that was devoted to things like driving back and forth to Mayo in Rochester.

“It turns out I was able to do things a little bit faster and it fell together,” Aase said, whose original plan was to retire from Mayo next May to start HELPcare. “It was four months from when I saw this building to when we opened. It’s the kind of thing that seemed like the hand of providence.”

One of HELPcare’s defining draws is doctor-patient times. Strobel, and any other physicians who choose to come in, will be able to spend a lot more time with a patient — up to an hour per visit.

It’s a change Strobel said has been a long time coming, as it reconnects with how medicine was practiced.

“I think that it kind of recaptures the soul of healthcare,” Strobel said. “Patients are able to be given the time to be heard.”

Strobel said that in today’s medicine, the process is largely built on speed, with doctors seeing multiple patients per hour, taking away needed time to get to the bottom of what really might be ailing them.

It’s a stress that’s being seen in both patients as well as doctors.

At HELPcare, which is an umbrella organization, each doctor is their own practice. HELPcare only acts to facilitate. It’s a symbiotic relationship that benefits both sides. HELPcare is able to keep costs down for patients and Strobel is able to practice the medicine he wants by maximizing time with each patient.

“In this payment model, the visit is never over, we’re just done for now,” Strobel said. “I’ve done that in the model where it’s paid for with insurance, but the next visit is a punishment because the patient has another co-pay. How about if we do two or three visits all clumped together so we can really understand you and we spend four, five hours doing that over a few weeks. Maybe the visit after that can be in a year.”

HELPcare won’t compete with hospitals like Mayo, with some patients having to be referred to other places depending on the procedure. Instead, HELPcare is looking to be an alternative for those without healthcare insurance or simply looking for another way.

There’s a flexibility to what HELPcare offers. Aase said that it’s something he can see expanding and finding homes in other communities.

“It could go in lots of places,” Aase said. “Where the rent is relatively cheap and more people wanting good and accessible primary care. Where a physician might say, ‘this would be a very nice place to raise my family.’”