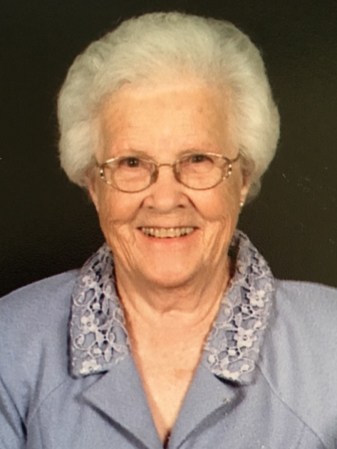 Elaine Carole Busho died at home on January 23rd at the age of 95. Elaine was born to Julia Jeanette (Rafferty) and Birdge Boston Babcock on Christmas Day in 1926, in Brooke Park, Minnesota.

Elaine grew up in Minnesota and married Milford Busho in 1948. They had three children–Connie, Craig, and Carole. Elaine was a homemaker, excellent cook, gardener, Sunday School teacher, and worked at the Green Giant canning company in the summers. During their retirement, Elaine and Milford lived in several states, including Texas, Alabama, and Tennessee, where they settled in 2008.

Elaine’s funeral will be held on Monday, February 7th at 11:15am at Franklin Road Baptist Church in Murfreesboro, Tennessee. It will be streamed on the Franklin Road Facebook page. The viewing will be from 10:00 am until the time of the service. Her burial will be at Oakwood Cemetery in Austin, Minnesota.

An online guestbook is available for the Busho family at www.woodfinchapel.com.