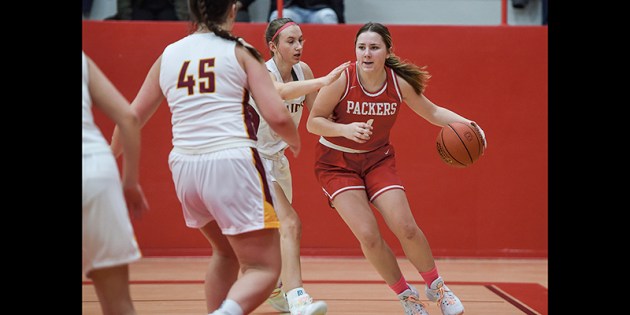 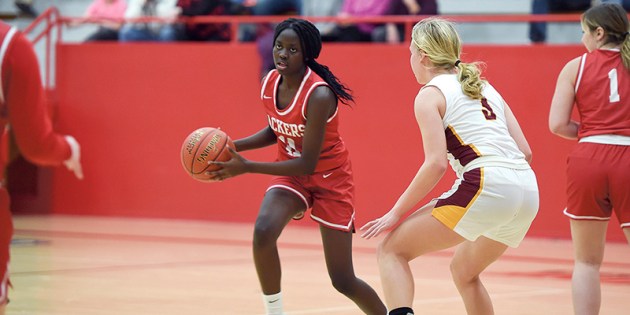 Austin’s Ajiem Agwa moves the ball along the top of the key during the first half against Northfield Tuesday night in Ove Berven Gym. Eric Johnson/photodesk@austindailyherald.com 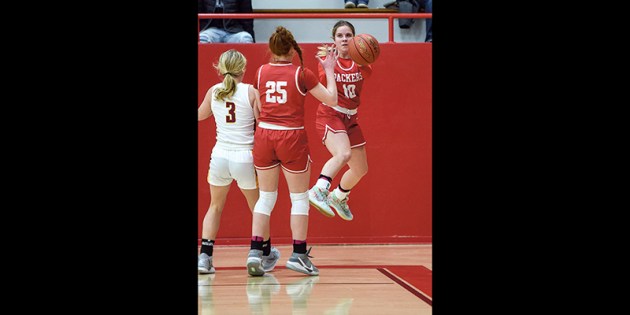 Austin’s Emma Dudycha attempts to save the ball from going out of bounds during the first half against Northfield in Ove Berven Gym Tuesday night. Eric Johnson/photodesk@austindailyherald.com 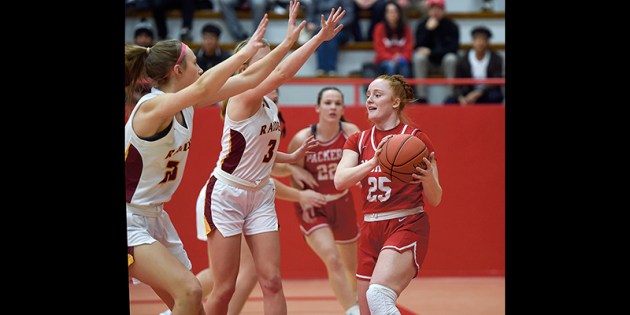 Austin’s Cassidy Shute tries to get out from underneath Northfield pressure during the first half Tuesday night in Ove Berven Gym. Eric Johnson/photodesk@austindailyherald.com

It was a day of celebration for Austin seniors and twin sisters Hope Dudycha and Emma Dudycha as they locked up their college futures just an hour before taking the court in a 53-29 win over Northfield in Ove Berven Gym Tuesday.

Hope and Emma both committed to the University of Crookston before the game on social media after talking to coaches from the team that morning. Hope went on to put up 19 points, five rebounds, nine steals and four assists against the Raiders (2-21 overall) and Emma chipped in four points and four steals.

“It was pretty late in the process, but we went up there for a visit and coach said he wanted both of us to come there. We really like the coaches and the campus and we think it will be a good fit for us,” Hope said. “It’s a big weight off our shoulders and now we can focus on the rest of the season and our goals. It’s time to focus on sections and hopefully state.”

The sisters will each receive an athletic scholarship and they will continue playing together — just like they have been since they were on the varsity team as seventh graders.

“I love playing with Hope. She’s my favorite teammate ever and now we’re going to play together in college,” Emma said. “It’ll be great.”

The Crookston Eagles, who play in the Northern Sun Conference, are a Division II team and they are off to a 4-17 overall start to this season.

Austin (18-4 overall) struggled from the field throughout the night as it missed a few lay-ups in the first half. Austin led just 7-5 eight minutes into the game, before it put together a 12-0 run that was capped by a Hope lay-up. Cassidy Shute and Hope hit early second half threes to extend the lead to 30-16.

“We haven’t won ugly in a really long time,” Austin head coach Eric Zoske said. “This had to be one of our worst offenses of the year, but when the ball’s not going in the hoop, you’ve got to stay focused on D and that’s what we did.”

Olivia Walsh had 14 points, nine rebounds and three blocks for the Packers on Paint the Gym Pink Night

“I want to thank all of the sponsors and community members and Northfield for teaming up on this cause,” Zoske said. “We hope the amount of money that we raised tonight helps somebody against a really terrible disease.”