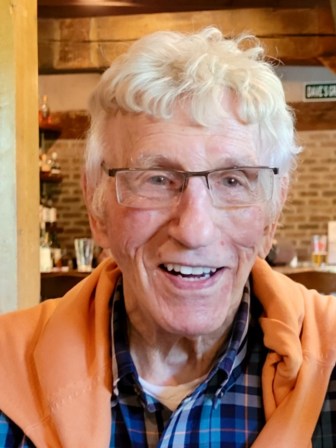 Dr. Robert Raymond Dahl, 90, of Austin Minnesota, passed away peacefully on February 10, 2022 surrounded by his family. Bob was born in Grand Rapids, Minnesota to Robert and Dorothy Dahl. Growing up on the “Iron Range”, he loved being both a 3-season athlete and scholar. Robert met Patricia Ann Trainer in grade school. They created an amazing friendship through the years.

On June 7th, 1952, Robert and Patricia were married at the Presbyterian Church in Grand Rapids, Minnesota. To this union, they created a beautiful life together and a 70-year journey. Dr. Dahl attended The University of Minnesota Dental School and was President of Delta Sigma Delta Fraternity. After graduation from Dental School, Dr. Dahl began his lifelong career practicing dentistry for 53 years in Austin, Minnesota. Dr. Dahl also served in the Army National Guard for 5 years. Bob and Patricia started a family, complete with Elizabeth Ann Morton (Dahl), Eric Trainer Dahl, and Kristin Lee Aakre (Dahl).

“Gompy” was a loving father, husband and grandfather. He enjoyed numerous hobbies with hunting, fishing, hockey, golf and tennis being at the top of the list. Bob was the best breakfast chef/bartender, not only at home but also on the Northern Minnesota Hockey Camp Trips and the many cabins rented over the years.

By all accounts, Bob led a blessed life.

There will be no funeral. A Private Family Memorial Service will be scheduled at a later date. Please send memorial donations to the Mower County Humane Society. Clasen-Jordan Mortuary is handling arrangements. Condolences may be shared with the family at clasenjordan.com.