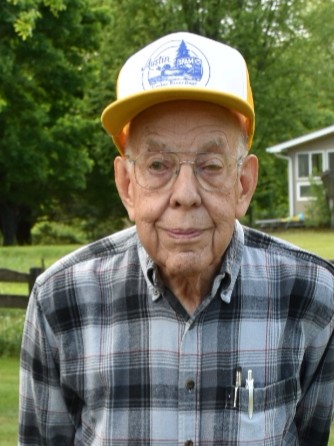 Hugeback-Johnson Funeral Home and Crematory of Fredericksburg has been entrusted with arrangements. Online condolences for the Richardson family may be left at hugebackfuneralhome.com

Don was born on Oct. 2, 1931, to Fred and Zerilda (Landon) Richardson on the family farm 6 1/2 miles northeast of Fredericksburg. He grew up with an older sister and younger brother on the farm, and they helped their parents with various chores on the farm and also attended country school. He attended New Hampton High School and was a member of the school’s Class of 1950.

He had an aunt who was an instructor at Eastern New Mexico University, and she urged him to go to college so he headed to Portales, where he earned a degree in industrial arts.

Don returned to Iowa and taught for a year at West Bend High School, but he learned in that year that teaching wasn’t for him. He took a job at KAUS/KAAL radio and television in Austin, which is where he found his calling as he worked as a sound and video engineer for decades.

He loved to go to auctions and he was an avid collector of antique radios, tractors, and hit-and-miss engines that he kept on his acreage just outside Austin. Over the years, he collected hundreds, if not thousands, of radios.

Don never married or had children, but he was an excellent brother and a great uncle to his nephews and nieces. He was very generous to all of them and loved spending time with them and helping them in any way he could.

He was a longtime member of both the Root River Tractor club and a ham radio club in Austin, and he remained active right to the end.

This loving and intelligent man who always thought of others before himself will be dearly missed by his family and friends.

He was preceded in death by his parents; a brother-in-law, William Knowles; and nephew-in-law, Dr. Ben Schmidt.