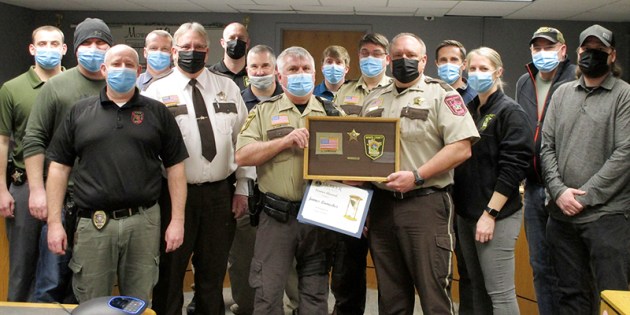 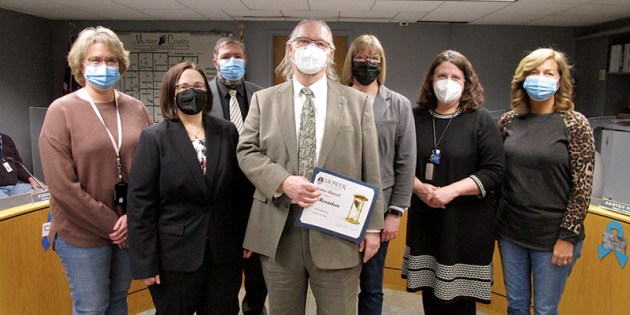 The Mower County Board of Commissioners Tuesday, honored a pair of long term employees during its morning meetings.

Senior County Attorney Eric Herendeen and Deputy Sheriff James Lamecker were both recognized for their combined 32 years of experience.

Herendeen has been with the Mower County Attorney’s office for 19 years.

“Eric has seen the worst of the worst every day,” said Mower County Attorney Kristen Nelsen. “Eric has handled it with grace.”

Nelsen talked not only about Herendeen’s skill as an attorney, but what he meant to those working with them.

“Eric has been a friend to all of us,” Nelsen said. “Personally to me, he’s been a rock, a confidant. I can’t imagine my day at work without him.”

Lamecker has been with the Mower County Sheriff’s Office for 13 years, but has also served in the military as well as an Austin Police officer. All told, he’s served for 42 years.

Representatives of law enforcement at Tuesday’s meeting spoke to his willingness to not only serve, but work with other officers, including Chief David McKichan, who was a detective for APD when Lamecker was still serving in a city capacity.

“He was always willing to talk to  you and treat you as an equal, despite the gap in our age,” McKichan said.

Lamecker’s recognition became emotional for the deputy as he recounted the kindness shown to him by colleagues during his wife’s battle with cancer, including the donation of time off from others to be with her.

For him, it was about the people he worked with.