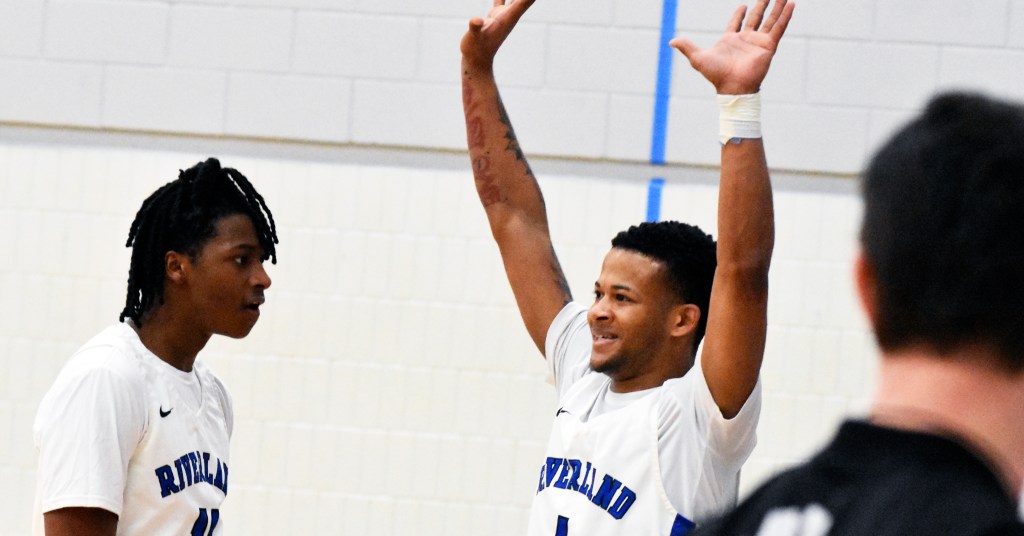 Riverland’s Trayvon Smith and Junior Stone celebrate a dunk by Stone as the No. 1 Blue Devils beat Western Tech earlier this year. The Blue Devils advanced to the National Tournament and will be the No. 1 seed, the first time in school history. Herald file photo

The Blue Devil men’s basketball team made program history when it won the North Plains District Region XIII title with a 79-67 win over Anoka-Ramsey in Anoka Sunday.

RCC’s depth led the way throughout their weekend run as no RCC player reached the 20-point plateau in the title game win or Saturday’s 80-60 win over Northland. Joe Burgos, who comes off the bench for the Blue Devils, was named Tournament MVP.

“When you play three games in three days at the collegiate level, depth is going to shine,” Hahn said. “That’s where we excelled all year long. This is probably the deepest team we’ve ever had. Some of the coaches told us that our five bench players may have been the second best team in the tournament.”

The Blue Devils (30-1 overall) have been facing pressure all season long, but they haven’t backed down.

“The biggest thing for us is we’ve had an X on our back since the beginning of the year,” Hahn said. “Every team we’ve played has tried to knock us off. We’ve had everybody’s best shot every week and we’ve been used to that style for awhile now.”

Burgos, Cleveland Bedgood and Lajarrion Spinks were named to the All-Tournament Team and Hahn was named Region XIII coach of the year.

The No. 1 Blue Devils will enter as the No. 1 seed in the NJCAA Division III will be held at Rock Valley College in Rockford, Illinois. RCC will have a bye week in the 12-team tournament and will begin play on Thursday.

“This has been a team of many firsts. Riverland had never been ranked No. 1 before and they’ve never had a 14-0 Division record before,” Hahn said. “It gets tough on the road in this conference. Rock Valley has a fantastic facility and it will be a unique environment.”

Hahn has now coached at RCC for nine years.

“The smiles on the kids’ faces today were a little bit different, but at the same time, we’re not done,” Hahn said.