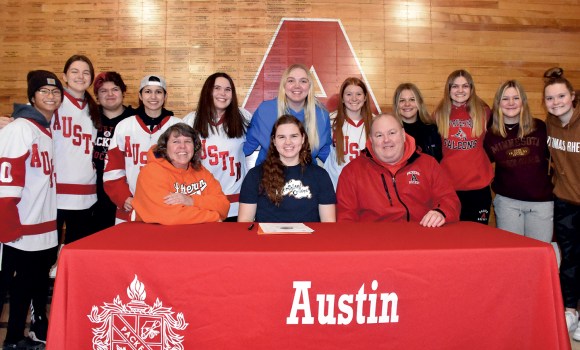 Kate Holtz poses with members of the Austin girls hockey team after she signed her letter-of-intent to play college hockey at Northland College in AHS Friday. Rocky Hulne/sports@austindailyherald.com

Austin senior Kate Holtz signs her letter-of-intent to play college hockey at Northland College next to her parents Troy and Diane in AHS Friday. Rocky Hulne/sports@austindailyherald.com 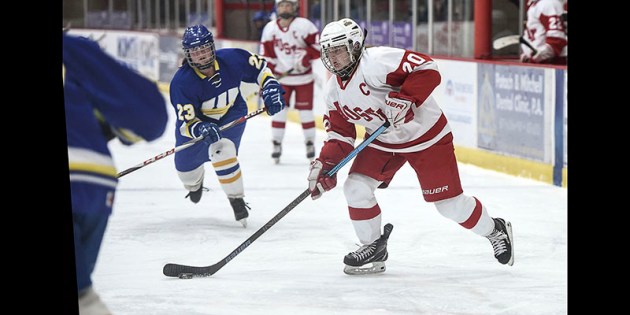 Austin’s Kate Holtz weaves the puck through traffic during the third period against Windom at Riverside Arena. Herald File Photo

Austin senior Kate Holtz is running out of ice time with the Austin Packers, but she has made sure that she will not be done with her favorite sport when Austin’s season ends.

Holtz signed her letter-of-intent to play college hockey at Northland College, a Division III school in Ashland, Wis., in Austin High School Friday. Kate will be playing just a one and a half hour drive away from her sister Lilly Holtz, who has two assists in 16 games as a junior at St. Scholastica in Duluth this season.

“If I need anything, I can go to her and she’ll help me,” Kate said. “I met most of the team at Northland when I visited and they were very nice and welcoming. The school itself has a great teaching program, which is what I want to go into. That was a big thing for me was to find the right school for my future.”

Holtz leads the Packers with 31 goals and 23 assists this season and she is ranked 16th in the state in goals scored.

She learned the game young from her father Troy Holtz, who currently coaches the Austin girls hockey team and used to coach the Austin boys hockey team.

Before she focuses on college, Holtz and the Packers still have a postseason to focus on. The Packers will begin Section 1A Tournament play on Saturday. With just four teams in the section, Austin will need two wins to get to its first state tournament since 2008.

“We’ll be pushing hard to get everything ready. Hopefully we can all push through and show that they want to be there,” Holtz said of the playoff push.

Northland currently has a record of 1-17-1 overall.