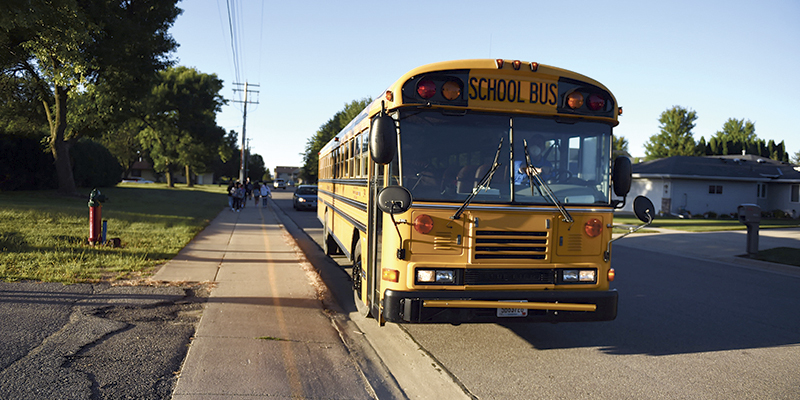 On Monday night, at the Austin Public Schools Board meeting, board members and administration heard from Benjamin Davis, routing lead with the Center for Effective School Operations (CESO) out of Minneapolis, which helps districts with greater effectiveness in a variety of areas.

At the heart of Davis’ Bell Time Study presentation Monday night was helping the district find a way to make bussing more efficient and effective in bussing both APS and Pacelli students.

Like many districts, staffing shortages in bussing have created several challenges for school districts during the pandemic.

Austin is no different, though Davis pointed out that Palmer Bus Service in Austin has done a very good job in juggling the challenges its seen.

“I cannot laud Palmer enough for what they’ve accomplished with this,” Davis said.

Some of that has to do with long ride times for some students. Davis discovered that the longest ride for a student in the morning logged in at 90 minutes and was elevated up to 113 minutes in the afternoon. As parents and families work to juggle schedules, many are simply opting to drop off their students.

Which is leading to another issue. Increased drop-offs has lead to traffic congestion at several of the schools.

“Some of that has to do with how convoluted the transportation situation really is,” Davis said. “The system, I believe, isn’t friendly enough as a transportation system in order to garner the ridership we would like to see.”

Davis polled both the district and Palmer in order to gain a better understanding of what that end result might be. Both sides worked with an undercurrent of better efficiency that would include a hard cap on buses used and shorter ride times for students.

There were also concerns of limiting grade level spread per bus and eliminating or reducing transfers as much as possible.

Davis presented a variety of tiered options that could accommodate these concerns, especially the limit of 24 buses Palmer requested.

“This is a hard cap for them,” Davis said. “Looking at your system and the total number of students that need to be transported, [we want to] get them to a level that’s below that 24 bus mark.”

Through a variety of options, Davis highlighted a three-tier system that would rely on 21.85 buses (including vans and transports) accommodating 1,202 students per tier at 55 passengers each bus.

Within that three-tier system there were a variety of scenarios that put different schools at different times and routes.

While planning continues, Davis pointed out that by looking at the issue now, there will be plenty of time to get the proper information to parents for the coming school year.

“We’re going to continue to refine this information over the course of the summer,” Davis said. “To give people kind of a rough estimate.