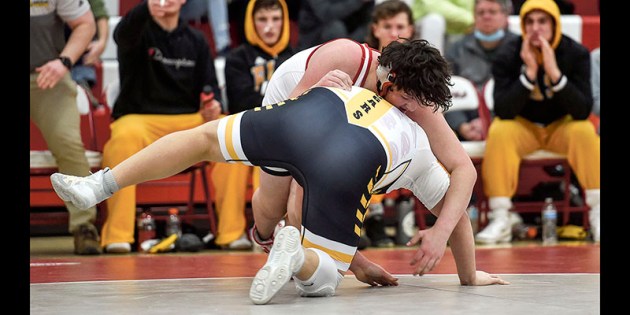 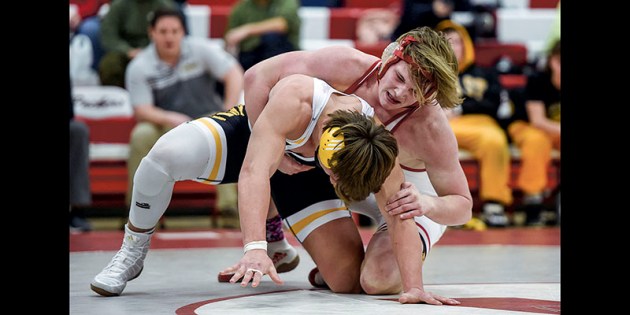 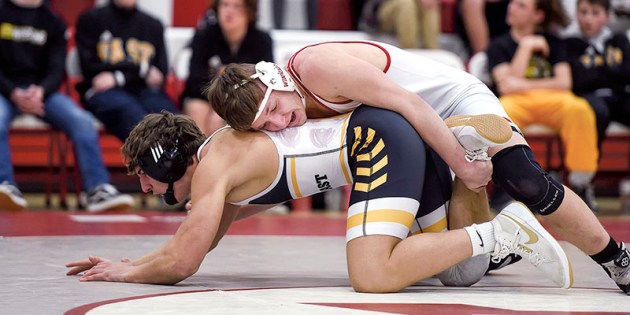 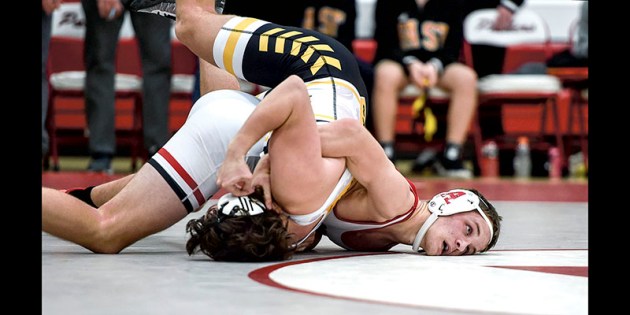 Austin’s Sam Oelfke looks up to the referee as he attempts to put Mankato East’s Cael Willaert on his back at 160 pounds Thursday night in Packer Gym. Eric Johnson/photodesk@austindailyherald.com 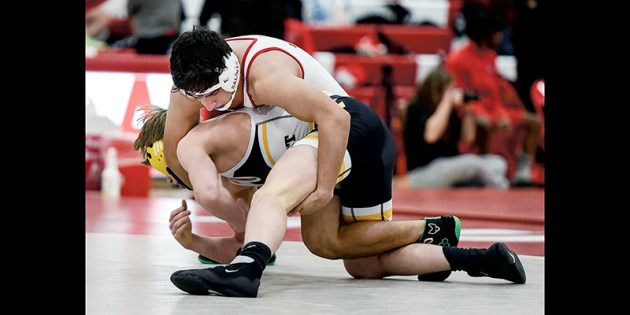 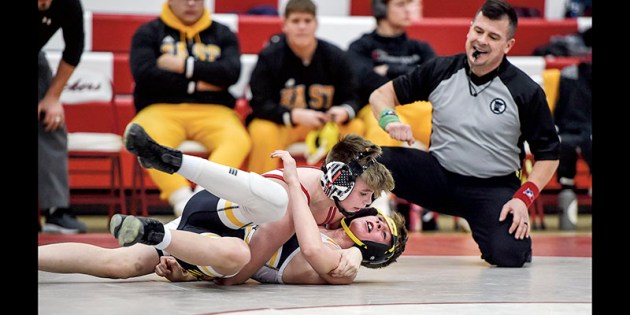 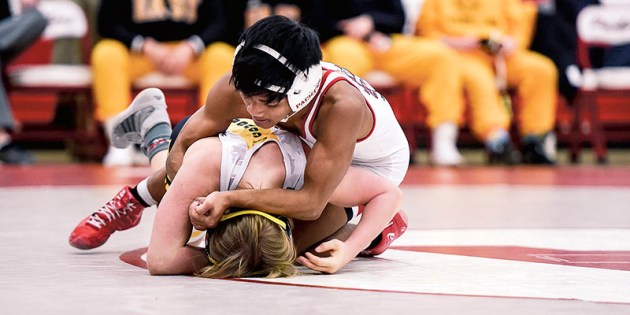 The Austin wrestling team celebrated senior night with some exciting matches as the Packers closed the night out with a 52-30 win over Rochester Century, after falling to Coon Rapids 64-15 and losing to Mankato East 43-19 earlier in the night in a home quadrangular in Packer Gym Thursday.

Austin head coach Jacob Nelson was happy with what he saw out of his team in their last home match.

“Getting three matches in on senior night was fun. The seniors wrestled tough and every single one of them got at least one win tonight,” Nelson said. “We’ve had a good year and we’ve been wrestling competitively with teams that had beaten us by a lot in the past.”

Austin senior Garrett Clark made his last match in Packer Gym a memorable one as he used a third period takedown to get within 6-5, but soon found himself trailing 12-5 after he was taken down and near falled. Clark was able to pull off a reverse on Century’s Sam Johnston and pinned him with 1:08 left in the 152-pound match.

“I trusted my conditioning,” Clark said. “That carried me through the match.”

Clark is only in his third year as a wrestler.

“You’ve got to take it one day at a time and win those small battles so you can win the big battles,” Clark said.

Austin senior Brenan Winkels also finished off his final home match in the winner’s circle. Winkels used an early take down of Century’s Nevan de Gafferelly to go up 2-1 and he finished things off with a third period pin.

“It’s pretty emotional because wrestling’s done a lot for me. I’m pretty sad about it, but I also plan on coming back to help with this team,” Winkels said. “This year has been fun and the morale has been fun.”

“That was amazing,” Winkels said. “Garret’s a new guy and he’s gotten better. He was excited after that and it got me pretty happy too.”

Austin’s Mark Tamke started strong with a first period takedown of Century’s Micahel Nail at 138 pounds and added another takedown in the second period to go up 4-0. Tamke hung on to win 11-2.

Austin senior Lathan Wilson won by forfeit against the Panthers.

The wrestlers celebrated senior night by writing thank you letters to their parents and handed them out during the match.

“We wanted to thank the parents for all of the time that they put in. I don’t know what they wrote and that’s between them and their parents, but I hope it was heartfelt,” Nelson said.