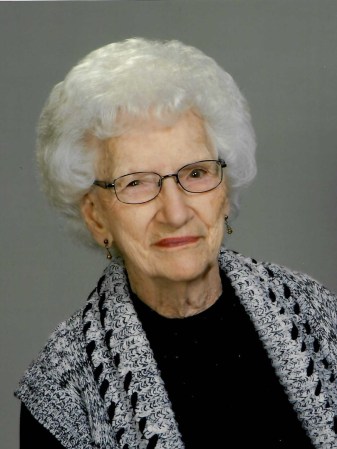 Lois was born on October 4, 1925 in Britton, South Dakota to Henry and Christina (Rademacher) Alberts. She married Theron (Ted) Schmidt on October 17, 1942 in Austin.

Lois worked at Kaiser Shipyards in Vancouver, Washington during World War II. After the war, she worked in the plant at Hormel for 35 years, from 1947-1982. Lois was proud to be the oldest living member of St. John’s Lutheran Church. She was also a member of the American Legion Auxiliary.

She always looked forward to summer vacations at Lake Vermillion and Leach Lake. In her spare time, she enjoyed sewing, needle point, listening to books and weekly card games with family, friends, and neighbors. She especially loved her time with her loving pet and best friend Maggie.

Funeral services will be held at 11:00 AM on Tuesday, February 1, 2022 at Clasen-Jordan Mortuary with Reverend James Groleau officiating. Interment will be at Grandview Cemetery. Visitation will be for one hour before the service.

Memorials may be directed to the Mayo Clinic Hospice Program.