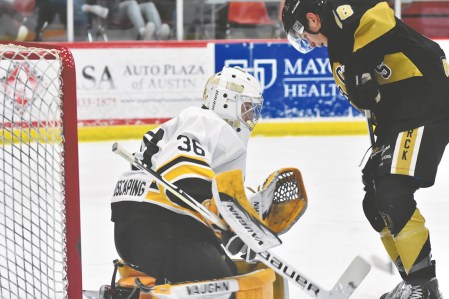 Knapp, who is 18 years old and from Waterville, Ohio, started and won both games, allowing just a single goal as he stopped 49 of 50 shots on the weekend. On Friday, Knapp made 28 saves in a 3-1 win. On Saturday, the NAPHL grad posted his first NAHL shutout, stopping all 21 shots that came his way in a 1-0 win.

“Klayton was really good for us this weekend. He made some big saves and earned his first shutout in the NAHL. He’s always doing extra and as a coach, you love to see your goaltender doing that daily. We are excited to watch Klayton continue to develop in the second half of the season,” said Bruins head coach Steve Howard.

Walter Zacher was an honorable mention as well, as the Buffalo, New York native had 3 assists in the weekend series vs. Minot. Zacher now has two goals and four assists in six games played this season for the Bruins.