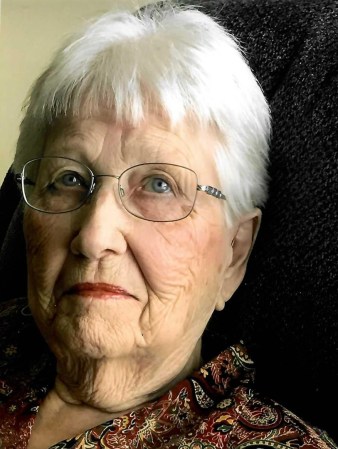 Jeanette was born July 17, 1924 in Blooming Prairie, MN, and was baptized and confirmed in the Lutheran faith. The daughter of Ralph and Randina (Sacquitne) Bagley, she grew up on the family farm outside of Blooming Prairie and attended a rural school through the lower grades before attending Blooming Prairie High School.

At 19 years old, she moved to Austin and began working at Hormel Foods, where she met the charming Lewis Thomas. They were engaged in 1944 and married in 1945. Together they would raise five children, three girls and two boys.

Jeanette was a loyal, loving, and faithful woman. As a young girl, she and her sisters entertained their family by putting on concerts and plays. She enjoyed solving puzzles—both jigsaw and crossword—and possessed a sharp mind for most of her life; even to her last day she could list without hesitation each of the 17 cows she had helped raise on the Bagley farm.

Beneath her dry wit and occasional playfulness was a practiced stoicism—she exuded patience and calm, a windless harbor for those around her. She took particular joy in her grandbabies, holding each one until they were too big for her lap. Though cooking was not her favorite activity, she made an applesauce that could turn even the worst of days around, and a potato dumpling soup that rivaled any.

In short, she spent her days here on Earth in the service of her family, loving them fully and in her own way.

She was preceded in death by her husband, parents, siblings, one grandchild, and one grandson-in-law. She will be missed.

She will be missed.

Funeral services will be held at 2:00 p.m. on Saturday, January 29th at the Clasen-Jordan Mortuary Chapel with Reverend Madison Chelberg officiating. Interment will be in the Oakwood Cemetery. Visitation will be held on Saturday afternoon from 1:00 to 2:00 p.m. prior to the service. Jeanette’s service will be available for viewing on Sunday, January 30th at clasenjordan.com.

Packer boys edged out out by Scarlets