Gondolas on the Go 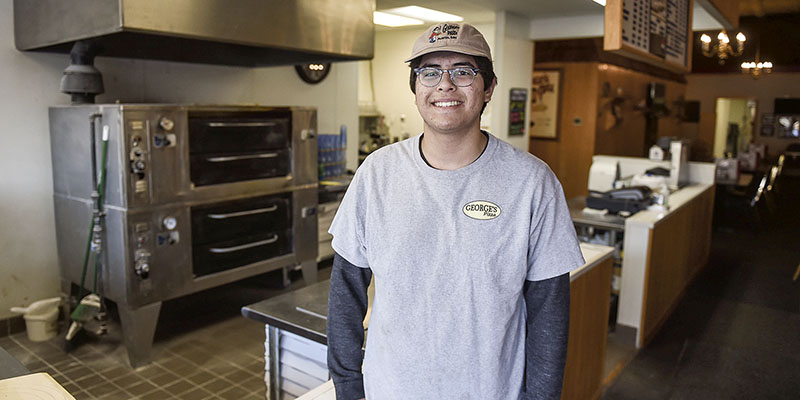 Sometimes, good things start with, “I wish I could do something about it.”

George’s Pizza employee Alex Gilbertson not only had that thought, he acted on it. Gilbertson drove seven hours, one way, to SSM Health Rehabilitation Hospital in St. Louis, Missouri recently to deliver four gondola sandwiches to a former Austin woman.

On Jan. 1, Gilbertson posted on the Facebook page EAT. DRINK. SHOP. AUSTIN that the sandwiches had been safely delivered in a moment that will stick with him for a very long time.

“Moments like that, where she was just smiling, I started thinking from her perspective,” Gilbertson said Wednesday. “In the hospital … it’s not a good time. It would make me so happy if someone did that for me. I just feel like I should do that for somebody else.”

The adventure started toward the very end of December with current Austin resident, Karen Diaz, who was attempting to arrange a shipment of gondolas to a long time friend who was in the hospital and who requested to remain unidentified so the story could center on Gilbertson.

Diaz started the work of gathering the containers and the dry ice to ship the sandwiches; however, according to Diaz’s own Facebook post on EAT. DRINK.SHOP.AUSTIN, she said that to overnight the sandwiches it would cost around $165 for shipping alone.

It was looking like the idea of shipping the sandwiches south was going to be left along the roadside, but then Diaz did something she doesn’t normally do.

“Just as I’m getting ready to call the sister, my phone rings,” Diaz said, adding that she normally doesn’t answer unfamiliar numbers. “Something told me to answer, so I did and it was Alex.”

Gilbertson had been told earlier by a co-worker about the developing situation and the more he thought about it the more he started homing in on the idea of delivering the sandwiches himself.

Diaz put Gilbertson in touch with the woman’s sister, who initially turned the offer down. It was just too much to ask of Gilbertson. But Gilbertson had other ideas.

“It was still on my mind. I couldn’t not think about it,” Gilbertson said. “I really, really want to. It would make me happy.”

It was nothing short of astounding to Diaz when Gilbertson informed her of his intentions.

But for Gilbertson, there was nothing to the trip. It was simply a chance to do something nice and worthwhile.

“I’m 19 and I am able-bodied,” Gilbertson said. “I’m able to do something like that. It wasn’t like driving to Texas. It was only seven hours away. I could do it. I just did it.”

After being put in touch with the woman’s sister, a plan was quickly put into place. George’s Pizza even covered the cost of the gondolas.

Before long, Gilbertson and his 15-year-old co-pilot and niece Adeline Ashley Helland were on the road south.

“She helped along the way too,” Gilbertson said. “I was planning on going by myself.”

It was an interesting trip to say the least. The duo ran into snow going through the midsection of Iowa, followed by rain the rest of the way.

“When I got in the room, it was the best,” Gilbertson said. “She just started tearing up right away. It was a really good feeling.”

From what Diaz heard afterwards, it was a delivery to remember.

“My understanding, she was in tears,” Diaz said. “She was very much in tears. She’s just as shocked as everybody else.”

“We were going 50 the whole time on the interstate,” Gilbertson said. “It took a while, but it was really fun.”

And it was all worth it. For Gilbertson, it was something that just made sense.

“It makes me happy,” he said. “Just being able to try and be a nice person, try and do the right thing. I feel like I try to have my motives in the right direction and just try to be positive.”

The entire experience was just as touching for Diaz. George’s Pizza is a favorite of her friend from her earliest days in Austin. Every time she returns to Austin she is sure to visit and order her favorite meal.

“Every time I think about it I cry,” Diaz said of Gilbertson’s trip. “Especially in these times, and to know there are young people with that kind of compassion for others.”

“It’s absolutely touching that somebody would do it,” she added. “She grew up in Austin, lived here most of her school years and then moved down there. She’s familiar with George’s and when she visits she wants to get a gondola from George’s.”

From when Diaz first posted on EAT. DRINK. SHOP. AUSTIN., to when Gilbertson announced the delivery, the support from the community has been phenomenal.

It’s made this entire endeavor a meaningful chapter in several lives.

“I love all of the support from the community,” Diaz said. “That’s why I posted it on Facebook. I wanted people to understand what an amazing young man he is.”

Gilbertson hopes the positivity he holds in his own heart can be shared by others. That the delivery to St. Louis can be an example.

“I hope they see the happiness,” Gilbertson said. “With everything going on, it makes me happy that I could do something like that.”

Would he do it again?

“One hundred percent, for sure,” Gilbertson said. “It was a fun trip. The drive was interesting. It was fun. I would do it again.”

Gone but not forgotten: Mother of Bruins super fan…