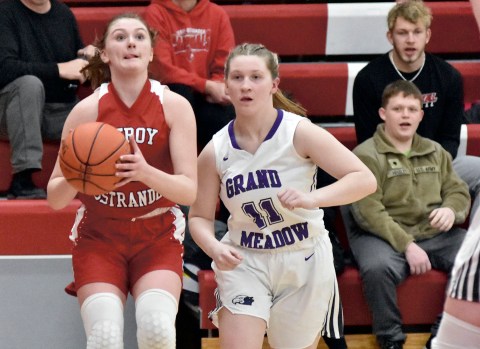 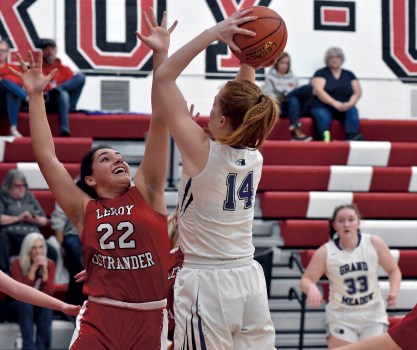 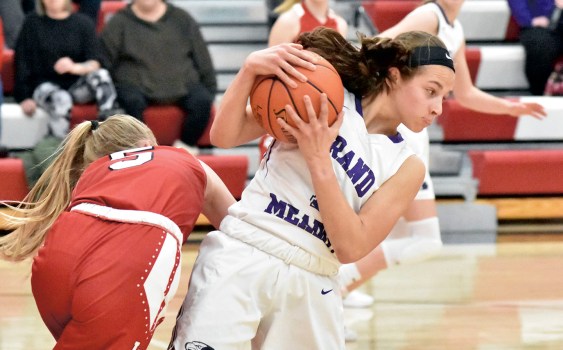 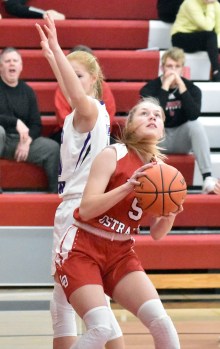 Jordan Runde eyes the hoop for the Cardinals. Rocky Hulne/sports@austindailyherald.com

GRAND MEADOW — The Grand Meadow girls basketball team is already rolling strong, but the Superlarks received some reinforcements as they beat LeRoy-Ostrander 66-29 in LeRoy Monday.

The Superlarks (11-2 overall) brought sophomore Lexy Foster back into the lineup from an injury and she is already showing what she brings to the table as she put up four points off the bench while grabbing three rebounds.

“This was the first game all year that we’ve had a full roster,” GM head coach Ryan Queensland said. “It’s going to take some time, but Lexy will give us some rebounding and some offense. The girls had to adjust to not having her and hopefully that experience will be good for us.”

The Cardinals (3-8 overall) hung around early on as Jenna Olson hit a three to bring her team within 11-10 with 11:14 left in the first half. But GM had a big answer and responded with a 26-2 run that put the game out of reach. River Landers, who finished with 20 points and six rebounds, had some big moves in the paint during that rally.

“We got off to a slow start. It’s Monday and we were a little bit stiff and our communication wasn’t the best,” Landers said. “We had to play our game and not let other teams or players set the bar for us.”

GM junior McKenna Hendrickson pushed the pace for GM as she filled up the box score with 14 points, four assists, six rebounds and four steals. At just five-foot, five-inches tall, Hendrickson didn’t hesitate throughout the night.

“We just had to get into the flow,” Hendrickson said. “Once we started boxing out, it got better. When I drive to the hoop, I just hope for the best.”

Queensland said that Hendrickson always gives the team a boost with her energy.

“Her motor doesn’t quit. She’s a bulldog out there and she’s an intangible for us who makes unexpected plays,” Queensland said. “She’s improving game by game when it comes to defense.”

Landers dominated the paint against the Cardinals, but she’s excited with how much better the team can get when Foster works her way back into things.

“One player makes such a difference, especially when it’s Lexy,” Landers said. “She’s such a strong player and such a smart player. We’re glad to have her back.”