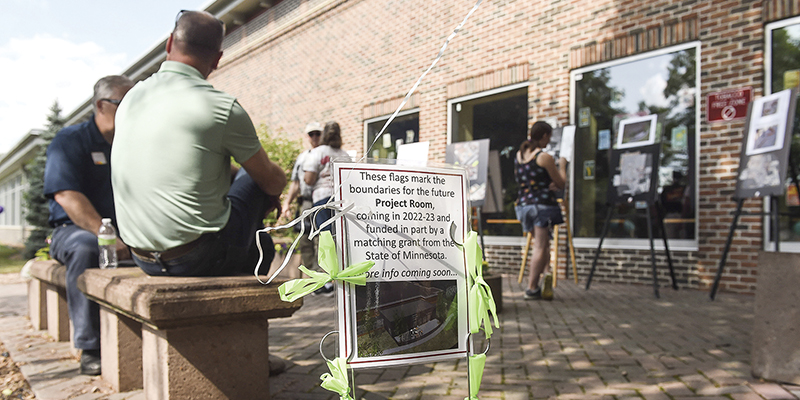 A sign marks out the boundary of what will be the Austin Public Library’s new Project Room, to be added in 2022-23. The photo was taken during the 25th anniversary of the library last summer. Herald file photo

Last year, the current Austin Public Library hit an important milestone — 25 years. Now it’s looking forward to another 25 years with an eye to completing a renovation project this year.

It’s part of a reimagining of the library as it looks to meet the needs of the community in terms of offering more space and making use of technology.

“We wanted to make sure the library building is good for the next 25 years,” said Library Director Julie Clinefelter Thursday morning.

Clinefelter came on as director in 2017 and was quickly tasked by the Library Board in putting together a strategic plan for the library. By 2018 she had begun pulling some things together and started coordinating important conversations geared toward predicting the future of the library’s purpose.

“Between conversations with the library board and staff … the building was 25 years old in 2021,” Clinefelter said. “One of the things we talked about was how much libraries had changed in 25 years.”

Cellphones were in their infancy and computers were more word processors than anything else. This comparison and conversation led into the question of the next 25 years.

The current building helped simplify the method of planning.

“On the upside, the library is built in such a way that it’s adaptable. It’s an open floor plan,” Clinefelter said. “You can change things, you can adapt things.”

Perhaps the biggest part of the library project is expanded project area that will feature an outdoor space. Photo provided

And largely that’s what the library is hoping to do. Plans currently call for an addition on the west side of the building that will serve as a project room. This space will be extended to outdoor area as well for activities.

This part of the project was hatched out of necessity.  The current project  room also hosts meetings and those two things can conflict when scheduling.

At the heart of the library, work will focus on a single point service, which will move the service desk to the front, rather than stretched out in its current location.

There is also work slated that will refine study and work areas within the library.

By 2020, work was quickly progressing toward the fundraising aspect of the project. A kick-off was planned for March 26, 2020, but by now we all know what came next.

On March 28, 2020, the library was closed due to the emerging COVID-19 that was running through the nation.

But instead of dampening the project, it found new life in 2021, when the board asked Clinefelter to begin looking at the project once again.

“All of the things we intended were even more important in a COVID world,” Clinefelter said.

At around the same time a grant opportunity from the Minnesota Department of Education came across her desk that offered a supplement to what had already been raised.

The DOE’s Library Construction Grant required a matching grant, but when approved, the timing couldn’t have een better.

“We pulled together what we already had in donations, gathered it in City CIP (Capital Improvement Plan) and we tweaked all of the things we needed to get the grant,” Clinefelter said. “The day before our big celebration, we found out we got the grant.”

However, by the time the project comes to fruition, it’s likely that final cost will have to be adjusted due to changes in construction costs.

“One thing I’ve learned is you always need more money than what you think we need,” Clinefelter said.

But the grant gave the project the necessary boost.

“We’re figuring  out what we wanted to look at,” Clinefelter said. “What’s been lovely about the grant is it helped us fast forward. We could potentially get it mostly done by the end of the year.”

When the space is all said and done, Clinefelter is hoping the reimagined library is representative of the community. A beating heart of sorts.