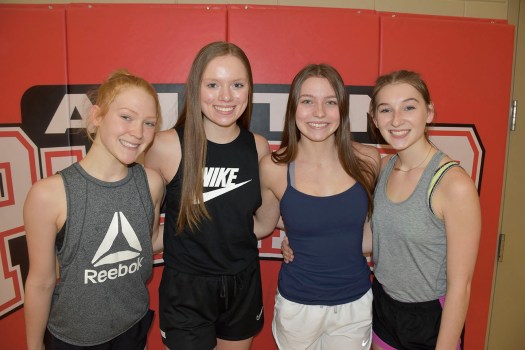 The Austin Packer Dance Team took first place in high kick with 6.5 rank points in the Edina Invite Saturday. The varsity jazz did not place. Photo provided by Leni Bell

The Austin Packer Dance Team always has high expectations and four of its dancers have already put themselves among elite company after being named to the Class AA All-State team this week.

“There are a lot of talented dancers in the state of Minnesota,” Feifarek said. “It’s a great honor and privilege to be all-state. It’s special.”

The Packers will be aiming for their 20th straight state berth this season, and the team is also hoping to be in medal contention again after the Packers finished with a second place in the high kick at the Class AA State Dance Meet last season, their highest finish ever.

Austin also has high hopes for the Big Nine Meet, which will be held in Faribault on Jan. 22.

Murphy is finding it hard to believe that the season is winding down, but she and her teammates are not going out quietly.

“The goal is to keep beating our best. That’s been in the back of our minds all season long,” Murphy said. “It’s definitely emotional. It went by so fast that I don’t even feel the end is coming, but it’s coming fast.”

Last season saw the Packers competing in masks in empty gyms, but this year has been a return to normal. The changes back and forth have brought stress amongst high school students across the country, but the dance team has served as a safe place for every member of the team.

“Dance has always been my getaway,” Feirfarek said. “Coming to practice with awesome teammates after a hard day is a way for me to forget about my problems for two hours. Getting back into the routine of school and a normal life was a struggle.”

Tweeten said she never has a bad day when she’s with her teammates on the dance floor.

“It’s an escape,” she said. “Dance is super uplifting and we all come together as a team. We’re very positive.”

Bell considers being all-state a huge honor, but she also feels special just to be a member of APDT.

“Being All-State is something every dancer looks up to and it’s a great honor. I feel really honored to represent the Austin Packer Dance team, because we are so successful,” Bell said. “We’re really pushing each other in every practice. We’re not satisfied with second place. The girls on this team are the best support system and they’re all our best friends.”

The Packers have some big meets ahead of them, but they aren’t feeling nervous. Instead, they’re excited.

“I cannot wait to get on the floor at Big Nine,” Tweeten said. “We are so ready this year and I’m so excited.”