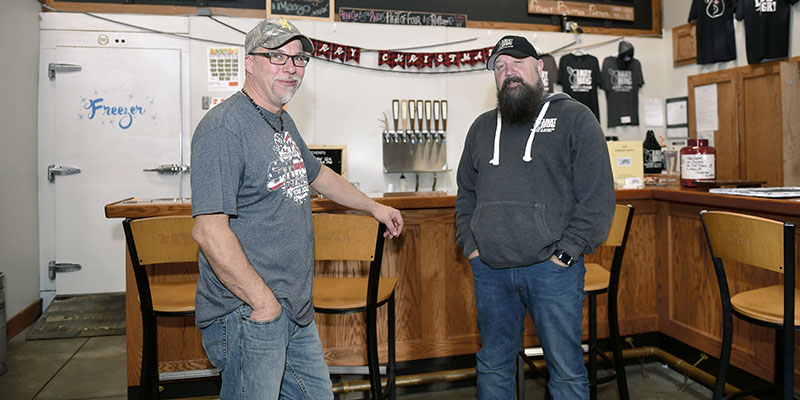 Kevin Jones and Joe Bower, co-owners of the Angry Hog, are continuing toward one common goal — delivering good beer to customers. Photos by Eric Johnson/eric.johnson@austindailyherald.com

Angry Hog just wants to serve you a good beer

Editor’s note: This is the first story of a new section in Austin Living Magazine called Raise a Glass, where we visit microbreweries, distilleries and wineries in our area and talk about the beverages they are creating. Pick up a copy of the January-February edition for the entire story.

It’s around 9:30 a.m. on a Friday and co-owner Kevin Jones is hustling about the brewing area of Angry Hog Brewery & Taproom. It’s already been a busy morning, but the cleaning is largely done and puts Jones and co-owner Joe Bower in a position to brew the next batch of beer.

While the Angry Hog wouldn’t be open until 4 p.m. that afternoon, the day’s tap menu hangs high above the bar of the establishment located at 500 23rd Avenue NW here in Austin.

Shut Up, Kevin!, Giggling Piglet read alongside the Muddy Snout — three of the best sellers at Angry Hog.

As Jones wraps up the morning’s cleaning, Bower points to a sign sitting in plain view for visitors coming to the brewery.

“Thank you craft brewers for making my drinking problem seem like a neat hobby,” Bower read. 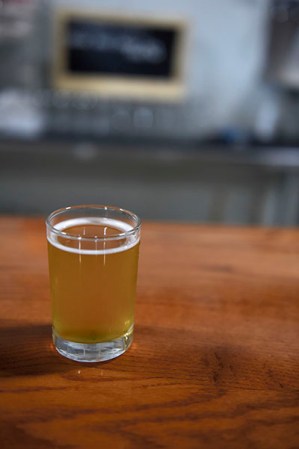 The Giggling Piglet, one of the Angry Hogs best selling beers. Eric Johnson/photodesk@austindailyherald.com

If the Angry Hog is defined by anything it would boil down to two themes: passion and a will to just create a good-tasting beer.

“We just wanted to make sure it was a decent tasting beer and good enough quality that people would want to come back and drink it,” Bower said.

Like many craft brewers, it shouldn’t come as too much of a surprise to know that Angry Hog rose from the kitchens of both men, just in different veins of brewing.

Bower was a beer maker while Jones created wines.

Both men, however, enjoyed visiting craft and micro breweries and as they continued brewing themselves talk of opening their own establishment start to gain some steam.

“We made the decision to do it in 2016,” Bower said. “At that time we started looking for our space, getting the licensing in order.”

Bower’s own passion for chasing the craft started small with a kit that came with everything you would need including wort extract, water and a three-gallon pot.

“It was terrible,” Bower remembered, but the spark had been lit and before he knew it, he was working with partial grain mashes followed by all-grain mashes.

Jones’ wine-making came about in similar ways, but their interests merged to form the foundation of the Hog.

“I was basically just wine, Joe did more of the beer and then we kind of blended them together along with the knowledge part of it and we went from there,” Jones said.

From the beginning, there were no illusions as to the scale of the operation. Its small maneuverability worked with the duo’s modest goals. There was no large scale start-up with plans of instantly making waves.

“We didn’t have a huge budget, nor did we want to go out and break the bank because we knew, in all honesty, this was a calculated risk,” Bower said. “We wanted to put good beer in the backyard.”

However, that risk came with an option to grow should they want they choose to go bigger.

A large part of the driveway, situated in front of garage doors has been taken up by outdoor seating during the warmer months and extends to a grassy area beneath a tree in front of the main door.

Likewise, there is plenty of room to expand their operation indoors, both in terms of the taproom as well as the brewing area. 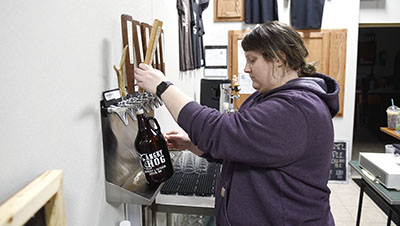 Allison Stoltz pours a growler of the Giggling Piglet, a cream ale available at the Angry Hog. Eric Johnson/eric.johnson@austindailyherald.com

Capacity has already been increased from an initial 15-gallon brewing capacity to a 30-gallon operation. Looking at the large brew area, it’s easy to see how a seven-barrel system might be utilized down the line, but their goals remain humble.

“We would like to fall into a three-barrel [system] and that would support all of our goals,” Bower said. “Keep the taproom in stock and then we do have a  distribution license now so we do want to get outside of the four walls.”

Admittedly, the distribution is a bit of a frustration at the moment. Jones and Bower had hopes of getting cans in stores by this point, but ironically a good summer in the taproom led to inventory issues, thus putting off distribution to a later date.

“That’s where a bigger system would be nice,” Bower said.

“My goal, I guess, I would just love to see my beer out there in stores,” Jones said. “Make a beer, go into a store and see it on the shelves. To me that’s a win.”

So the big question is: what are you going to find on a visit to the Angry Hog?

You’re in luck, because it’s a little bit of everything. Ales and stouts of all kinds grace the Hog’s menu.

And they certainly aren’t afraid to experiment to find a unique tasting beer to add to the menu. Tweaks in grains and fruits have led to all kinds of one-of-kind beverages, including sours that have brought together the beer and wine-making experiences of both men.

“You’re always trying to change it,” Jones said. “You want something fresh, something new. You just kind of throw fruit together, add it with another and see what you get.”

One can always tell the level of passion for something by the failures. After three years, it’s still disappointing for Bower and Jones when a beer doesn’t come out right or goes bad during the ferment.

“The creation is a lot of fun,” Bower admitted. “When we come up with an idea, it’s nerve-wracking because you have no idea how it’s going to taste, but then when you do that first draw it’s super exciting. When we have our struggles and you work hard and you’ve sat out here and you have a beer that’s gone bad in that fermenter, it’s deflating.”

Both Bower and Jones will admit the Angry Hog has and continues to be a learning experience. Mistakes are made, disappointments are realized, but there are also the triumphs.

The oatmeal stout on the Angry Hog’s permanent menu was a hit right away. Creamy and easy to drink, the stout has an earthy coffee flavor with a soft feel on the tongue.

“Our oatmeal stout has been good from day one,” Bower said. “The Muddy Snout, for sure, we always have that one.”

At the end of the day it’s about the customer as both Bower and Jones sometimes have to put their palettes to the background.

But to hear the reviews from patrons still means everything.

“One of my favorite things is we get a ton of out-of-town traffic on Saturdays,” Bower said. “When you get out-of-towners and then they tell you all of these breweries they’ve been to … and then can tell you, ‘this is one of the better beers I’ve ever had.’ I can’t explain to you how that feels.”