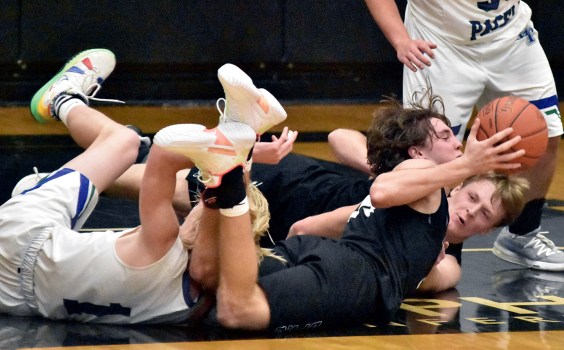 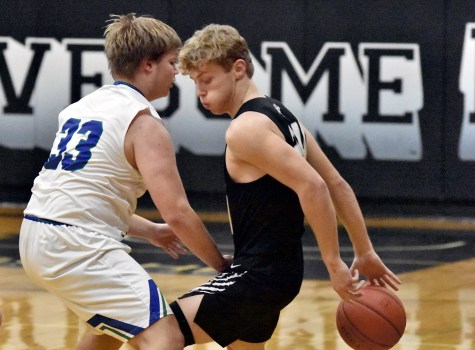 Colin Jordison dribbles behind his back against the defense of LP's David Christianson. Rocky Hulne/sports@austindailyherald.com 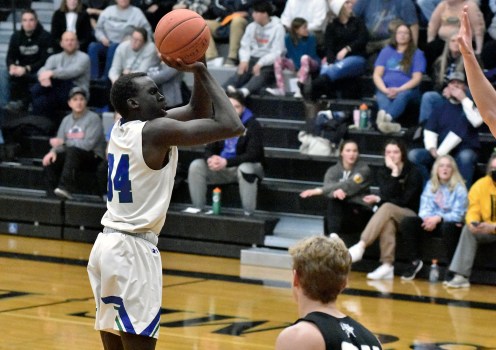 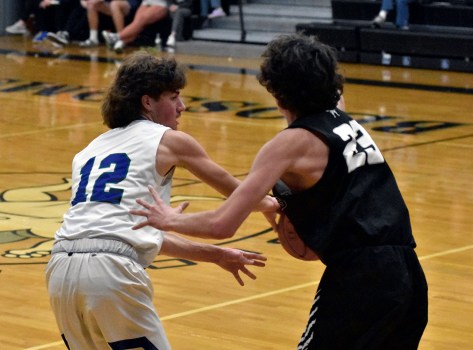 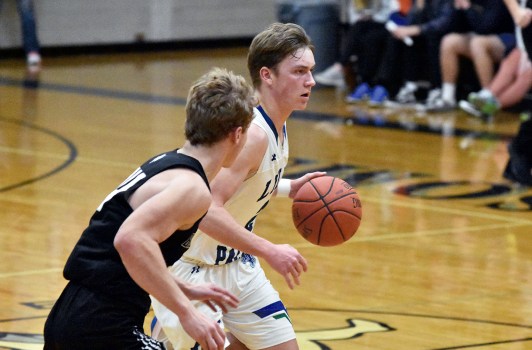 The Lyle-Pacelli boys basketball team had some role players make some big plays to make a late push in beating Blooming Prairie 67-62 in BP Monday night.

The Athletics (7-2 overall) trailed by six late in the game when Buay Koak knocked down a three to bring his team within 60-57 with 3:08 left in the game. David Christianson came up with a steal on L-P’s next possession and tied the game when he hit a three of his own on a pass from Koak.

L-P was playing the game without starting guard Mac Nelson and Trey Anderson only played in the second half for L-P.

“David hit some big threes for us,” Koak said. “We needed those other guys, because Mac is usually our big spot-up shooter. Everyone was collapsing on me and David and Mitch (Johnson) were out there spotting up. They’re probably not used to big moments like this, but they stepped up tonight.”

L-P cranked up its defense in the final minutes and the Awesome Blossoms (1-5 overall) weren’t able to respond. BP committed some late turnovers and its final chance to tie the game came up short when Brady Kittelson missed a three while trailing 65-62 with five seconds left.

“We knew we were going to battle the whole game,” BP head coach Cam Rutledge said. “Down the stretch, we have to take care of the ball. We did not do that tonight and we did not finish our shots at the rim.”

L-P head coach Carl Truckenmiller said that he didn’t know that his team would be short-handed before the game and things got tougher when guard Jake Truckenmiller, who had 15 points, ran into foul trouble throughout the night.

“We had to throw some guys in and then Jake got in some foul trouble,” Carl said. “I’ll take the win. We toughened up at the end when we needed to.”

The game was a back-and-forth contest throughout, but BP seized a 60-54 lead when Drew Kittelson blocked a shot and found Payton Fristedt for a lay-up with 3:30 left in the game.

BP had taken a 54-50 lead after Brady Kittelson hit a three-pointer and Drew scored inside. Brady, a freshman, finished with 13 points.

“Brady’s a very athletic kid and we’re still trying to work him into more of a basketball player role,” BP Rutledge said. “He’s a great athlete and he can shoot it. Him making a couple of big shots didn’t surprise us one bit.”

Drew finished with 21 points and 14 rebounds and gave Koak all he could handle in the paint.

“He’s someone who can jump with me. I had to box out,” Koak said. “He was a tough matchup for me physically. I don’t play against a lot of guys like him.”

Packers shoot down Byron in opener