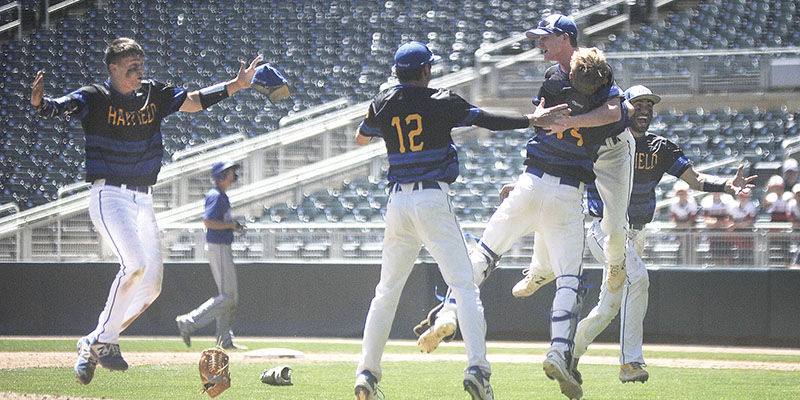 The Hayfield boys basketball team captured the first ever state championship in school and program history when they beat Hancock 61-60 in the Class A title game.

The Vikings finished 21-4 overall in a season that required players to wear masks due to the COVID-19 pandemic. Hayfield lost to Southland and Grand Meadow early in the regular season, but beat both of those teams on its way to the title.

Just a couple of months after bringing home a state basketball title, the Viking baseball team went unbeaten and won the first state title in program history when it topped New York Mills in the Class A title game.

Hayfield trailed 4-2 in the fifth inning, but Erik Bungum put the game back in Hayfield’s hands as he blasted a three-run double to put the Vikings up 6-4. Bungum went 6-for-10 with a homer, three doubles and eight RBIs from the No. 7 spot in the batting order during the Vikings state tournament run.

Hayfield finished 26-0 overall and outscored its opponents 85-11 in the postseason.

The Vikings had a strong senior class, but current senior Easton Fritcher, who has committed to play baseball at the University of Minnesota, was an elite lead-off hitter, an ace pitcher and a top notch center fielder.

The LeRoy-Ostrander football team put together a dream season as it won its first state championship in school history, beating Fertile-Beltrami 55-8 in the Class Nine Man Championship this past fall.

The Cardinals finished with a record of 12-2 overall as they were led by Chase Johnson, who ran for 272 yards and threw for 140 yards, while producing five TDs in the state title game. Johnson’s success was made possible by the blocking and defense of Gavin Sweeney up front, and Tanner Olson, who was a menace on defense. Olson also boosted L-O’s offense when he switched from offensive line to running back towards the end of the regular season.

L-O did not field a varsity football team in 2015, but the Cardinals rose fast over the past six years.

The Austin girls basketball team earned its second trip to the state tournament in a span of three years when it broke through in 2021.

Austin’s run ended in a 60-47 loss to Hill-Murray in the state semifinals, but the Packers are making another run at greatness this winter as the team is unbeaten.

Austin has received a big lift from senior Hope Dudycha, who is now over 1,200 career points.

The Austin Packer Dance Team had its best finish in program history when it took second in the high kick division at the Minnesota Class AA Meet.

Due to the pandemic, the Packers warmed up for their dance in the parking lot and were on their way back to Austin almost immediately after the performance, but it is a day that many of the dancers will relish for quite some time.

Blooming Prairie grad Megan Oswald went out on top with the BP girls as she put up 18.2 points and 11.3 rebounds per game in her senior season.

Oswald now plays at the University of Jamestown.

Logan Kelly swims in the backstroke portion of the 200-yard medley in Bud Higgins Pool in March. Herald file photo

Austin grad Logan Kelly finally won big when he claimed a state title in the 200-yard freestyle at the Class A Swimming and Diving Meet.

Kelly now swims at Division I IUPUI in Indiana.

Kicking it off right

Hebrink, who had stops at UW-River Falls and Riverland Community College, was at VCSU last season and Gach, who was an All-American at North Dakota State College of Science, took last season off before transferring to VCSU.

Both players are playing key roles for the Vikings.

Austin native Both Gach came back to hold a two-day basketball camp this past summer for players of all ages.

Vikings find their groove against L-P