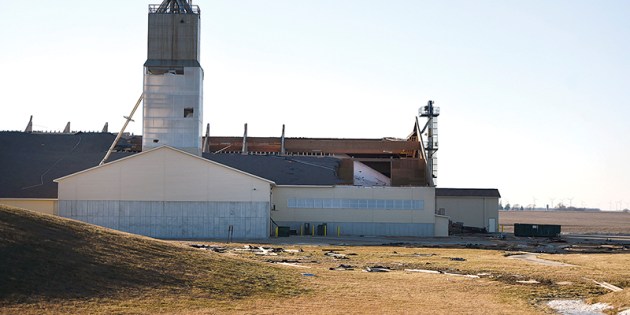 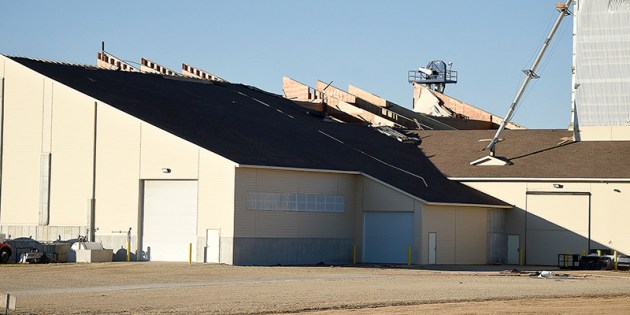 The roof of the CHS Dry Fertilizer Plant east of Grand Meadow had its roof taken off by Wednesday night’s storms. Eric Johnson/photodesk@austindailyherald.com 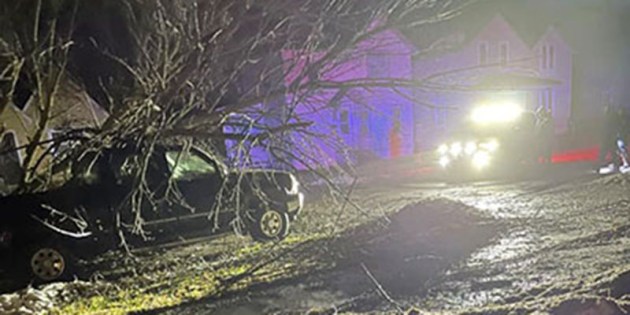 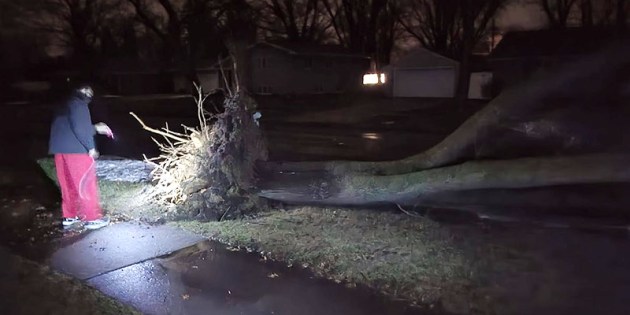 Trees down in southwest Austin. Photo provided by Ben Pischke 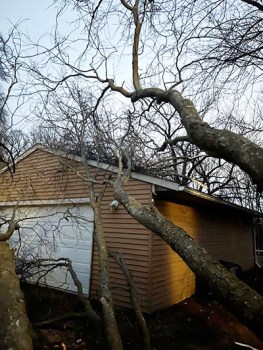 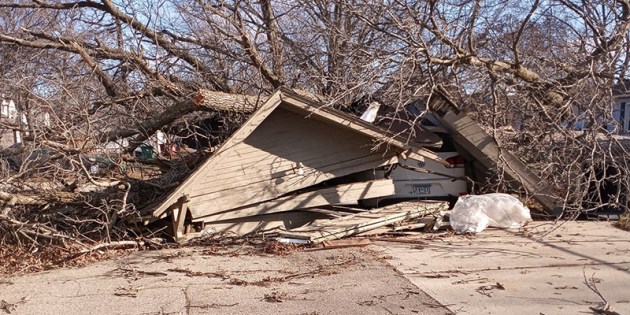 A tree lays over top a ruined building in an Austin alley Thursday, a result of Wednesday night's storms. Photo provided by Kevin Nelson, Austin Parks and Recreation. 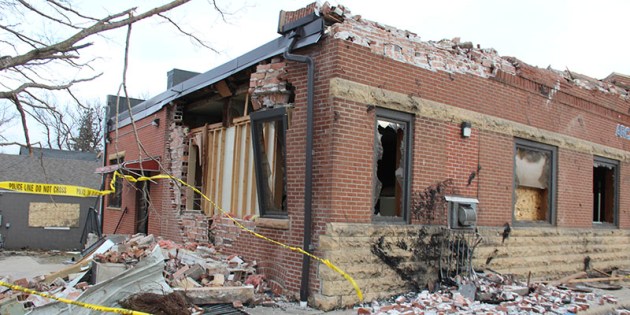 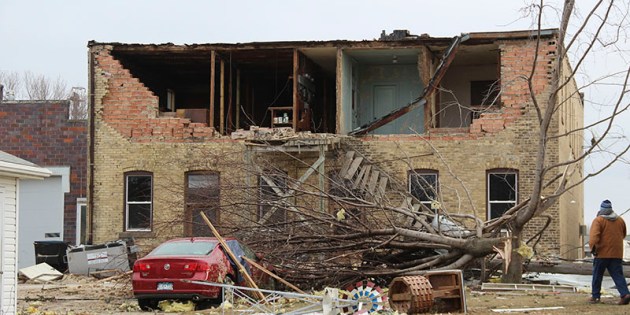 The back wall of the building in downtown Hartland that hosts the post office was ripped off Wednesday night during severe weather. Sarah Stultz/Albert Lea Tribune 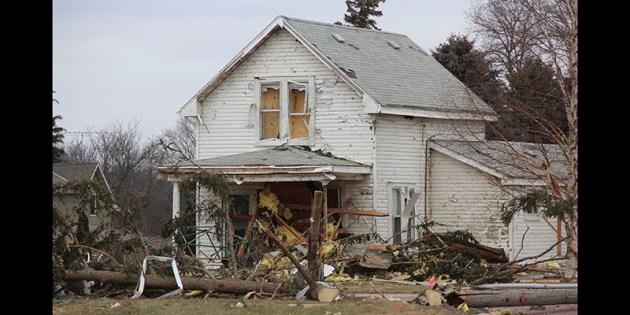 No injuries reported in Mower, possible tornado in Hartland

The line of historically rare and powerful storms that plowed through the area Wednesday night, was responsible for widespread power outages in both the county and City of Austin, resulting in continued clean-up Thursday.

Austin Utilities Executive Director Mark Nibaur said that power in Austin went out community wide at around 7:30 p.m., but was restored to much of the community by 10:30 p.m.

“The story of the day is around 7:30 p.m. last night, the transmission circuit that serves Austin tripped,” Nibauer said. “We had a number of things: transmission poles went down and equipment failure due to lightning strikes.”

All three of the transmission circuits that serve Austin failed during the night pitching the community into pitch black.

Once those minor issues were fixed, AU was able to go substation by substation to restore power to the community.

“We quickly realized what the problem was,” Nibauer said. “We just worked our way backward.”

Nibauer said this is the biggest power outage he’s seen since coming to Austin.

“I’ve heard some conversations that the last time the whole city was in the dark was back in the early 90s,” he said.

According to Mower County Sheriff Steve Sandvik, while much of the county sustained moderate damage, the eastern part of the county was hit more severely.

Sandvik reported that the county was filled with downed branches, trees and power lines. He also said that a house in the eastern part of the county had its roof completely lifted off, while the CHS Inc. Fertilizer Plant, east of Grand Meadow, had a majority of its roof damaged, with debris scattered about the adjoining field and grounds of the plant.

“Thankfully, no injuries or deaths were reported,” Sandvik said of the impact from the storms on the county.

According to a post on Twitter Wednesday night, a trained spotter near Grand Meadow reported 83 mph wind gusts and gusts in the 70s were reported elsewhere in the county resulting in much of the damage.

Power was largely restored to the county through the day Thursday and Friday, with some pockets remaining throughout those two days scattered across the county. A press release sent out by the Freeborn-Mower Cooperative reported that through Wednesday night and into Thursday, crews were able to reduce outages from 5,700 to around 600.

“The Lyle area is currently still out of power due to downed transmission lines and poles feeding the Alliant substation that powers our lines in that area,” said Al Stadheim, director of Engineering and Operations for Freeborn Mower Cooperative in the press release. “Our crews have patrolled and verified that all of our lines are fully functional and ready to go when ITC/Alliant are able to restore the feed to our lines.”

By Thursday afternoon, though, the City of Lyle had had its power restored.

Between 35 to 40 homes sustained minor damage, and a few businesses were severely damaged according to Emergency Management Director Rich Hall.

Another two tornadoes were confirmed near Alden.

Prior to Wednesday night, the latest a tornado had been recorded in the state was on Nov. 16, 1931. It was  one of only seven November tornadoes in state history.

Both Wednesday night and Thursday morning, several Austin residents reported trees down, including one behind Cedar Valley Services as well as a flag pole in another’s yard. Another photo showed a trampoline that had been tossed into a tree.

Austin Police Chief David McKichan said Wednesday that they were aware of damage and that they had pulled in extra help overnight  to handle calls.

“We are still assessing the damage,” McKichan said in an email to the Herald. “We are aware of branches and trees being down in Austin at this time. In some cases they have taken lines of various types down. We do have extra staff in on overtime assisting our existing officers and we are able to handle Austin’s calls for police services.”

The system, which marched up from Nebraska, resulted in hurricane-force winds and tornadoes throughout the Midwest including Nebraska, Iowa and Minnesota.

Olmsted County Sheriff’s Lt. Lee Rossman said a 65-year-old man was killed Wednesday night when a 40-foot tree blew onto him outside his home. In all, five people were killed due to the system’s fierce nature.

The storm continued tracking north and delivered a different kind of punch in the form of high winds and snow, leaving 400,000 homes and businesses without electricity in Michigan, Wisconsin, Iowa and Kansas according to poweroutage.us.