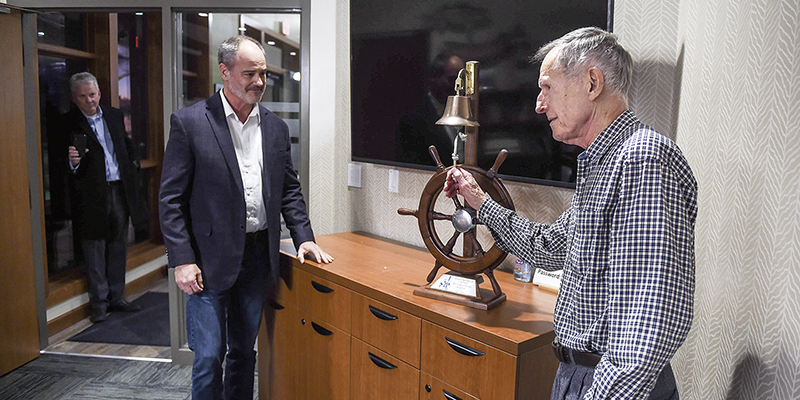 Dr. Richard Nordin rings the old bell from the Spamtown Belle Wednesday night after being presented the bell and the boat’s wheel at a Parks and Recreation meeting. Eric Johnson/photodesk@austindailyherald.com

Nordin recognized for his years as captain of the Spamtown Belle

For years, the sight of the Spamtown Belle being launched into East Side Lake was a sign of summer, just as you could be sure that her captain, Dr. Richard Nordin would be seen at the helm.

Even though the Belle was retired a couple years ago, the memory remains and on Wednesday night those memories were honored when the Austin Parks and Recreation Board presented Nordin with the Belle’s wheel and bell in honor of her captain.

“It’s my pleasure to give a little bit of what you used to steer and ring,” said Mayor Steve King, who was on hand to help present the gift to Nordin. “It’s not lost on anybody in the community. We just wanted to say thank you … for what you did and we just want to thank you on behalf of the city and the citizens for what you brought to Austin and thats the Spamtown Belle.”

For nearly 20 years, the Belle coasted on the waters of Mill Pond and then East Side Lake, giving riders a unique perspective on Austin’s two prime water resources. 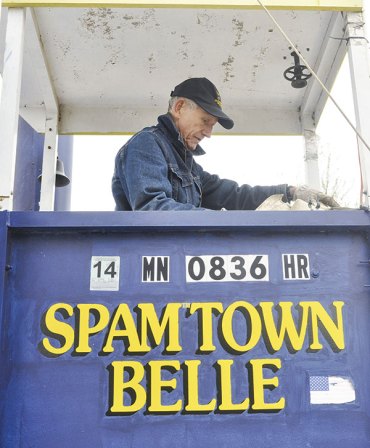 “There were people that said, ‘what’s the fun about going around Mill Pond or going around East Side Lake?’” Nordin said. “‘You can walk around and see the entire thing.’ But that wasn’t the charm of the boat. It was the uniqueness of a real paddle-wheel boat and there’s not too many of those around.”

During the 17 years she paddled across Austin’s waters, Nordin estimates thousands of people were treated to rides. Those included local riders, state and out-of-state riders and even those visiting from around the world.

But the height of its glory came from some inauspicious depths. Literally, the bottom of East Side Lake.

“It was christening by immersion,” Nordin joked. “My wife maintains that it didn’t really sink, it just sort of settled. It sat there on East Side Lake for a couple hours looking grand, then shortly after that it was sitting on the bottom.”

For years, Nordin and a handful of other pilots guided the paddle-wheel about these two bodies of water, determined to give people a fun day on the water.

But a paddle-wheel isn’t a delicate craft to guide.

“There were very windy days on East Side Lake where we would have 20 or 25 minutes of leisurely cruising and then five minutes of sheer terror as we brought a six-ton boat into dock,” Nordin said, again laughing.

However, the Belle didn’t have smooth waters all the time. For a number of years they struggled to keep the boat afloat due to funding or the craft breaking down.

Nordin said it was because of the charity from people like Gary and Pat Ray along with the skills of others like Bill Regner that the Belle was able to keep on churning. 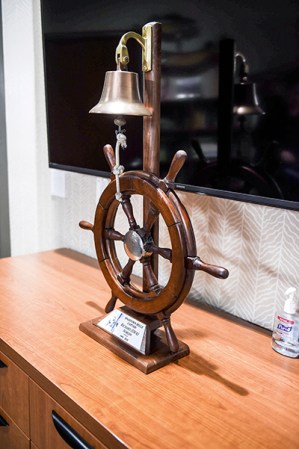 The bell and wheel from the Spamtown Belle, which was presented to Dr. Richard Nordin. Eric Johnson/photodesk@austindailyherald.com

“Gary and Pat Ray, when we ran into tough times for eight or nine years, they funded it and it worked out pretty well,” Nordin said. “Bill Regner did a fantastic job restoring it. It was just the experience of having people looking forward to coming aboard and getting a ride.”

But the end did come for the Belle and after its retirement a couple years previous, it was broken down. However, some thought that the two most recognizable aspects of the Belle needed to go to Nordin, who so lovingly cared for the Belle for all of its years.

A outwardly emotional Nordin summed up the Belle in his own way.

“I certainly have many, many fond memories,” Nordin said.