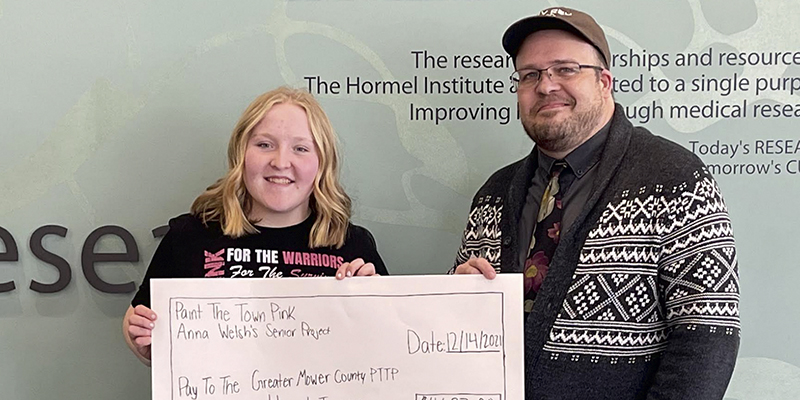 LeRoy-Ostrander senior Anna Welsh learned a lot about her community when she chose to do her senior project on raising funds for Paint the Town Pink this year.

Welsh learned that people are willing to give to a good cause and she also learned that breast cancer hits a lot closer to home than she realized. Welsh recently raised $4,647 for PTTP through donations that she obtained through reaching out to the community and holding Pink Nights for the L-O volleyball and football teams. 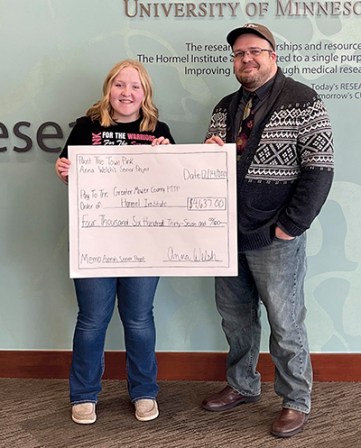 “At first I just wanted to do it for the cause, but after I started doing this, I was told about people in the community who had breast cancer that I was not even aware of. That helped me stay focused to make sure I did a good job on this,” Welsh said. “This cause has always been something I’ve liked helping with over the past few years. Breast cancer is a huge thing and hopefully we can find a cure for it someday. I wanted to be a part of it.”

Welsh was able to organize her fundraising through a Facebook account and letters to the community. She also received help from her mom and assistant volleyball coach Angie Olson, especially on the night of the volleyball game, since Welsh was playing in the contest.

George Aslanidi, PhD, Associate Professor, is one of the beneficiaries of PTTP as he is working in Molecular Bioengineering with the hopes of developing a Cancer vaccine.

Aslanidi said the seed money he receives from PTTP has helped him immensely.

“PTTP is a great event and it’s one of the best fundraising events that I have ever seen,” Aslanidi said. “We are extremely grateful for the community to raise money so we can initiate pilot projects.”

Aslanidi works with dogs who have cancer and he’s trying to develop a vaccine that can help them, so he can begin working on a vaccine for humans.

“I’ve never been able to retrieve major funds for this, so the seed money is very helpful,” Aslanidi said. “It’s similar to a vaccine against infectious diseases. You are teaching a system how to fight cancer. If we succeed, it will not only help to treat dogs, our furry friends, but it will also be immediately applicable for clinical trials for humans.”

Welsh is thankful for everyone who stepped up to help her cause.

“I would like to thank everybody who donated and everyone who supported my project from LeRoy, Houston and Spring Grove,” Welsh said.