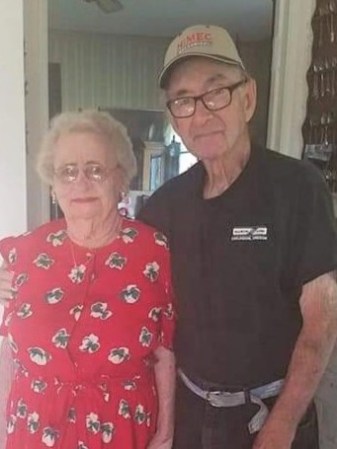 Douglas Eugene Kiser, age 97, of Blooming Prairie, Minnesota, passed away on Monday, December 13, 2021, at Prairie Manor Care Center in Blooming Prairie. Just a day later, on Tuesday, December 14, 2021, his loving wife of 76 years, Elsie Theresa Kiser, age 96, of Blooming Prairie, Minnesota, passed away at Prairie Manor Care Center. Douglas was born July 16, 1924, in Mendota, Illinois, to Berle and Maude (Malloy) Kiser. He graduated from Mendota High School. On June 27, 1944, he entered the United States Navy, serving his country during WWII and earning the rank SV-6. He was honorably discharged from the service on April 1, 1946. Elsie Attaway was born October 14, 1925, in New Orleans, Louisiana, to Andrew and Viola (Parpare) Attaway. Douglas and Elsie were united in marriage on April 15, 1945, in New Orleans. To this union six children were born. While living in Louisiana, Elsie worked for Binders Bakery and was trained by the two head bakers. Her specialties included homemade roses and wedding cakes. Elsie’s family always remembered her humming tunes while baking. She took pride in her appearance and was always dressed to the nines. Douglas and Elsie made their home in the Brownsdale, Minnesota area where they farmed and raised their family. In addition to farming, Douglas had a 30-year career with Hormel Foods, retiring in 1979.