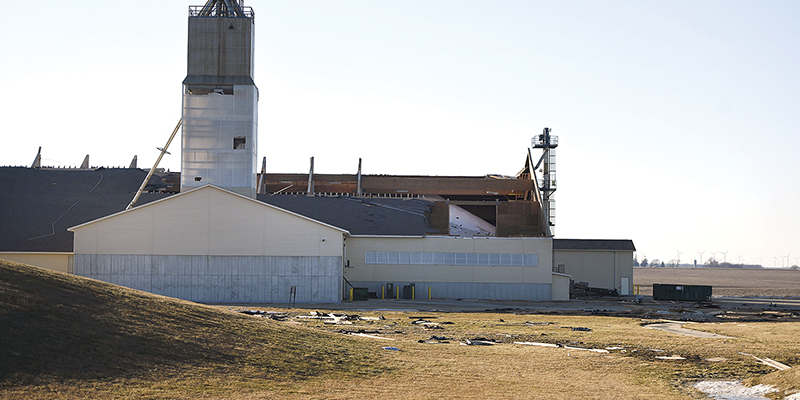 The Mower County Board of Commissioners on Tuesday received a wider picture of the damage caused by Dec. 15’s freak storms that spawned a number of tornadoes throughout southeastern Minnesota, northeast Iowa and southwest Wisconsin.

The report given by Emergency Manager Amy Lammey painted a picture of how widespread the county’s damage was and totaled $542,780.

The damage estimate qualifies the county for state help, but isn’t enough to trigger FEMA funds for the area. The damage to individual properties was also not enough to elicit state or federal help.

According to Lammey, the National Weather Service confirmed that an EF1 tornado with peak winds was on the ground near Racine for 3.3 miles and was 85 yards across.

The storm touched down southwest of Racine before its path cut northeast across Highway 63.

Numerous properties on the east side of the county suffered damage including one home that had its entire roof stripped away. The storm  also knocked out power to that area for several days.

“Many areas up in this part of the county were out of power for a full week,” Sheriff Steve Sandvik told the board Tuesday. “I was out for a week and a half.”

Near Grand Meadow, a CHS Fertilizer Plant also had a large section of its roof sheared away, raising concerns as to the product inside.

“Being a fertilizer plant, we didn’t know if we had a chemical release to worry about,” Lammey said.

While the east of Mower took the brunt of the Dec. 15 storms, Pike indicated that the entire county felt the effects that night.

“There was not a part of the county that wasn’t affected by this storm,” Pike said.

Nor was the damage contained to that night. The next day, a second round of wind was responsible for pealing a roof off of a Main Street LeRoy building like a can of tuna. The night before the roof had been in tact.

The Dec. 15 storms set a record for the latest tornadoes in a year on record in Minnesota.

Message to the world