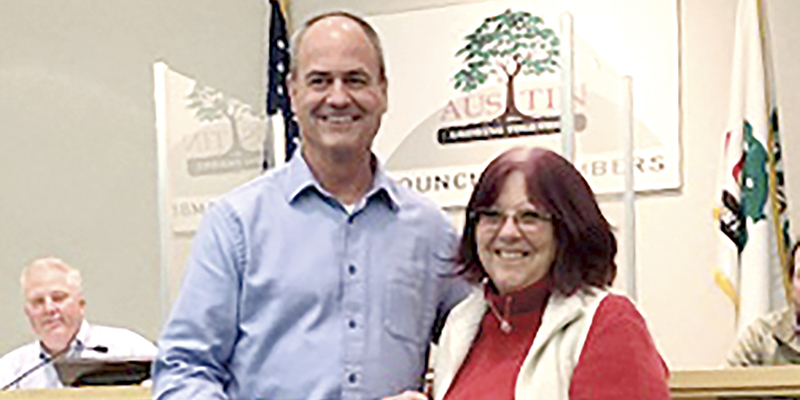 Austin Mayor Steve King is photographed with Cheryl Hays to honor her for her retirement after 45 years with the city. Photo provided

In its final meeting of 2021, the Austin City Council on Monday night approved a variety of elements including the 2022 budget/levy, along with moves to help bolster the hiring pool for Austin police officers.

They also approved canceling the 2022 ad valorem tax levy for this year for the Austin Utilities facility as AU has the resources on hand to make this year’s payment of $1,280,646.

Later in the meeting, the board voted to approve eliminating the 30-minute response time requirement for police officers.

This requirement required APD officers to live within 30 minutes of Austin, but it also handcuffed the department in terms of hiring.

In what has been seen as a far-reaching issue with other departments, APD received just one application for two openings.

“Right now, we are faced with a scenario that I do feel will go on for a couple years,” McKichan said in an early December work session. “Hiring officers, finding candidates is a struggle for all agencies. I’m aware of one department that got zero response.”

The hope is that these moves will help lure officers from higher population areas and give APD more options.

Referring to the relocation option, Human Resources Director Trish Wiechmann told the board that a caveat is the officer has to relocate to Austin in three years, one year extra from the initial two years originally offered.

If the officer showed good faith in trying to move, but housing was difficult to find, that could be expanded to an extra six months.

The board unanimously approved of the moves, with Mayor Steve King remarking, “It’s just the right thing to do at this time.” 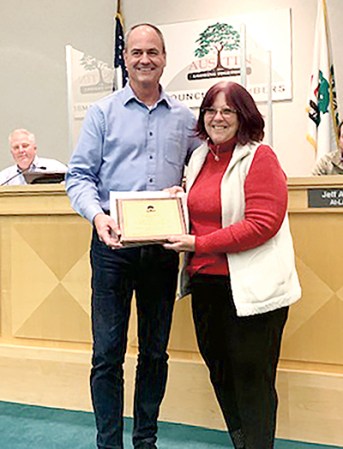 Austin Mayor Steve King is photographed with Cheryl Hays to honor her for her retirement after 45 years with the city. Photo provided

Hays had the longest tenure of the four recognized, working with the city for 45 years, from 1976-2021. During that time she moved up through the city, starting by working for nine years at Riverside Arena before eventually becoming a clerk at City Hall.

“Anyone who’s done anything with the city saw Cheryl at the desk,” said City Clerk Ann Kasel. “She will be greatly missed.”

“Every time I walk in she’s got a smile,” said councilwoman Joyce Poshusta. “She’s warm and welcoming … you’re going to be missed.”

In looking back at her years, Cheryl said there was never any cause to work anywhere else.

“It’s been a wonderful 45 years,” she said Monday night. “I’m going to miss everybody too.”

Mueller worked for the APD from 1994 to February 2021, and followed that up by being elected to the Mower County Board of Commissioners.

“He had an outstanding career, starting with Fillmore County,” McKichan said. “I have an enormous amount of respect for John.”

Eggert worked with public works and the Wastewater Treatment Plant from 1992 to April 2021.

“We appreciated everything he provided for us at the Wastewater Treatment Plant,” City Engineer Steven Lang said.

Adams worked with public works and the street department from 1995 to November 2021.

“He was talented … and did a great job for us as a mechanic,” Lang said. “He saved us money with in-house maintenance.”

• The council adopted its five-year Capital Improvement Plan featuring around $158 million worth of projects from 2022 to 2026. About $80 million of that will be for Wastewater Treatment Plant upgrades.