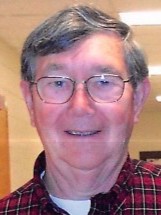 Carl was born April 9, 1933 in Bancroft Michigan to J. Harold and Nellie (Walter) Kingsley. He was a graduate of Durand High School married Janice Colleen Hammer on March 12, 1959.

Carl went on to join the United States Air Force where his intelligence and abilities were recognized, and he became a graduate of Officers’ Training School and attained the rank of Major. He traveled extensively with the Air Force and was stationed in Japan, Thailand, Hawaii, and many other places throughout his career. In addition, he earned a Bachelor of General Studies degree at Chaminade University of Honolulu Hawaii and a Master of Science degree at Illinois State University.

After retiring from the Air Force, Carl went on to several other careers, including a stint with the Illinois Valley Library system as business manager in Pekin, Illinois where he introduced computer technologies; the University of Florida where he taught as a professor as well as designing and producing systems manuals for the physical plants; and H&R Block, where besides filling out tax returns, he trained other workers on the incoming new computer software programs.

Carl finally completely retired and then he and Janice toured virtually the entire continental United States, and Alaska, in various campers and motor homes. His far-flung children and other family members received their visits with great delight.

He was preceded in death by his parents; J. Harold and Nellie Kingsley, his loving wife Janice, his daughter Sherry (Bryan) Scott, and his brother Leon Kingsley.

In lieu of flowers donations can be made to the Disabled American Veterans’ Charity (www.dav.org) or to 22 2 NONE (www.wwwnone.org) which is a non-profit organization that works to raise awareness and provide support to end veteran suicide by helping veterans continue “Fighting the Fight Within.”