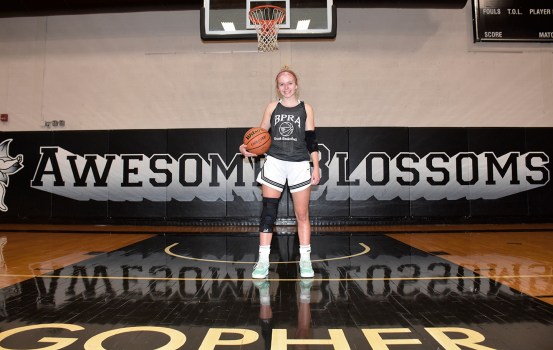 Blooming Prairie senior Bobbie bruns is back in action this season after suffering a broken femur last spring. Bruns is BP’s all-time assist leader and she’s hoping to play college basketball in the future Rocky Hulne/sports@austindailyherald.com 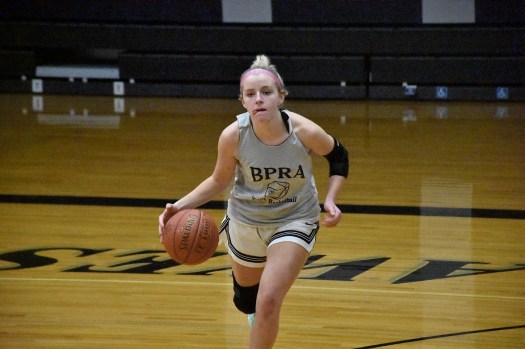 BLOOMING PRAIRIE — It was a typical spring afternoon when Bobbie Bruns’ life was handed a major detour.

In a moment, she was facing an injury that immediately ended her softball season and put a damper on her upcoming basketball season.

After six months of hard work, the Blooming Prairie senior is back on the highway to success.

Bobbie was on her way from a softball game to Applebee’s when she was in a car accident just a quarter mile from her house last May. The wreck left her femur broken. She was in so much pain that she couldn’t produce any tears.

All she could do was yell.

“Things happened really fast,” said Bobbie. “Next thing you know, I’m in my vehicle crashing into another car and my leg is broken. The first thing that went through my head was that I was done with softball and I was done with AAU. I was trying to wrap my head around that.”

Bobbie was in a wheelchair for a couple of months after the accident, but she soon began to push harder. She was given a six month window to recover from her injury and Bobbie hit that deadline as she was back in BP’s starting lineup for the girls basketball opener last week.

“She’s got a ton of determination with her week to week progress. She went from crutches to running from July to August,” said BP head coach and dad John Bruns. “Six months seems like a long time, but it’s not a long time for this type of injury. She’s worked really hard and she’s had an excellent physical therapist. She’s not 100 percent and she’s still got to get in shape, but from where she was six months ago, it’s a miracle.”

Bobbie is the Awesome Blossoms’ all-time assist leader and ranks third in school history in steals, but her basketball future was put in doubt when she missed out on her AAU schedule this past summer. She is now doing her best to land a college team to play for as she embarks on this season with the Blossoms.

Bobbie is starting to draw interest from Division III schools, but there were a lot of tough days before the season.

“There was a lot of frustration. It was really tough, because your senior year is your biggest year to get recruited. There’s nothing you can really do about it,” Bobbie said. “You can’t take anything for granted. Things can happen so fast and you have to be thankful for what you have, because it can be taken away from you.”

Bobbie was her usual self during Wednesday’s practice as she was knocking down three-pointers and running the offense. Most importantly, she’s leading a young BP team that is trying to find its way early in the season. The Awesome Blossoms are 1-2 overall and host Chatfield at 7:15 p.m. tonight.

“Bobbie’s played in a lot of big games and to have her leadership and her knowledge of the game is really important for our team,” John said.

Bobbie, who has also played volleyball and ran cross country for BP in the past, is embracing her final season with the BP girls basketball team, along with planning on getting back on the softball diamond this spring.

“I love being able to create for my teammates and I like being the playmaker on the floor,” Bruns said. “I’m just happy to be playing. Some of these girls are my very best friends.”