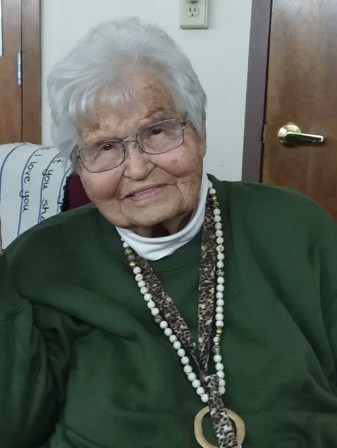 Audrey Marjorie Queensland was born January 22, 1927 in Bennington Township Mower County. On Tuesday, December 14, 2021, she passed away at the Grand Meadow Health Care Center. Visitation will be held 3-5 PM on Sunday, December 19, 2021 at the Hindt Funeral Home in Grand Meadow. Funeral services for Audrey will be held at 11AM Monday, December 20, 2021 (with reviewal one hour before service) at the Grand Meadow Lutheran Church with Pastor Megan Reedstrom officiating. Burial will take place at the Bear Creek Cemetery.

Her life was spent loving and supporting her family and friends. As the daughter of Clarence and Margaret Maley of Grand Meadow, she grew up learning the values of hard work and perseverance. After graduating from Grand Meadow High School she attended Normal Teachers School in Austin, MN and taught in a country school north of Grand Meadow. She married the love of her life, Karl Queensland, on March 17, 1945. Together they farmed and raised four children. They later moved into Grand Meadow where they operated Queensland Grocery Store until retiring in 1989. Audrey spent many winters in Arizona during her retirement and when it was time, she returned to her beloved Grand Meadow. In summary, Audrey was a teacher, business woman, wife, mother, daughter, sister, and friend. She lived her Christian faith by loving people unconditionally. She has blessed many in her life with her humor, hugs, smiles, kind words, and compassion.

She was proceeded in death by her parents, Clarence and Margaret Maley, two brothers, Robert and Ronald and honorary grandson, Matthew Scrabeck.

Audrey’s family would like to express their gratitude to the staff of the Grand Meadow Care Center.

Online condolences may be left at the Hindtfuneralhomes.com