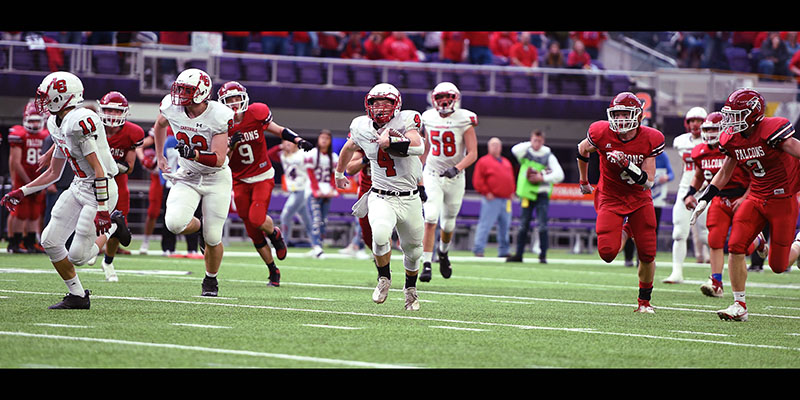 The senior completed 63 percent of his passes for 2,185 yards, 36 TDs and six interceptions. Kittelson ran for 547 yards (10.7 per carry) and 10 TDs. Kittelson was a Mr. Football finalist and he played in the Minnesota All Star Football game. He has committed to play football at Minnesota State University in Mankato.

The senior caught 37 passes for 892 yards and 14 TDs. Jordison has committed to play football at University of Wisconsin-River Falls.

The junior was a steady leader up front for the Packers.

The L-O senior was a big-time blocker up front and he also caught 16 passes for 143 yards and five TDs as a tight end.

Olson was physical up front early on in the season for the Cardinals. He moved to running back for the postseason and ran for 768 yards (7.4 per carry) and 19 TDs. L-O’s offense ran for almost 5,000 yards on the season.

The sophomore allowed just one sack in 249 pass attempts this season.

The senior had 11 solo tackles, 68 assisted tackles and seven sacks.

The senior had 60 tackles and one fumble forced.

The freshman only began starting halfway through the season, but he finished with a team-high 88 tackles to go along with tackles for a loss and 3.5 sacks.

The senior finished with 64 solo tackles and he was in on 135 total tackles, 20 of them for a loss or no gain. Kennedy had 34 tackles against Mabel-Canton, which was the fourth most in MSHSL history and a Southland school record. Kennedy forced five fumbles and recovered two fumbles.

The senior had 23 tackles and four interceptions.

The senior was in on 33 tackles and he picked off one pass.

The senior was in on 110 tackles to go with three interceptions.

The senior completed 65 percent of his passes for 13 TDs and four interceptions. He ran for 654 yards (6 per carry) and 10 TDs.

The speedy junior made the most of his opportunities on a run-heavy team as he caught 24 passes for 444 yards and five TDs.

The junior completed 51 of 139 passes for 519 yards and five TDs. He ran for 215 yards and a score. Truckenmiller added 36 tackles and two interceptions on defense.

The sophomore had five sacks and eight tackles for a loss, two with a pair of fumbles recovered and forced.

The senior ran for 786 yards (7.3 per carry) and scored nine TDs and he also caught 29 passes for 237 yards and four scores. Heydt had 62 tackles and one interception on defense.

The junior caught 28 passes for 477 yards and four TD.

The senior played running back, tight end, wide receiver, defensive end, linebacker and defensive back for Grand Meadow. He finished with 362 rushing yards and four TDs to go along with 20 catches for 318 yards. Ludemann also had 24 solo tackles and 61 assists.

School closings ahead of winter storm