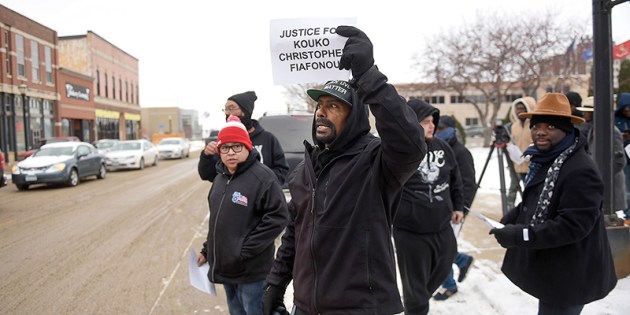 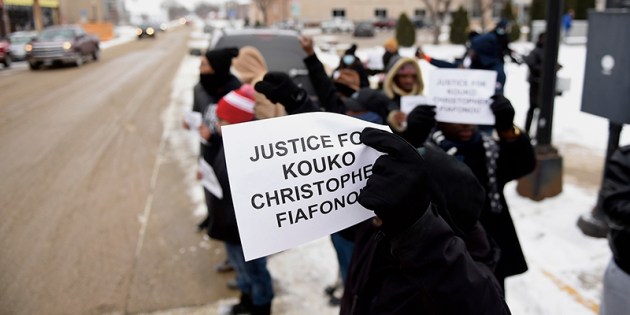 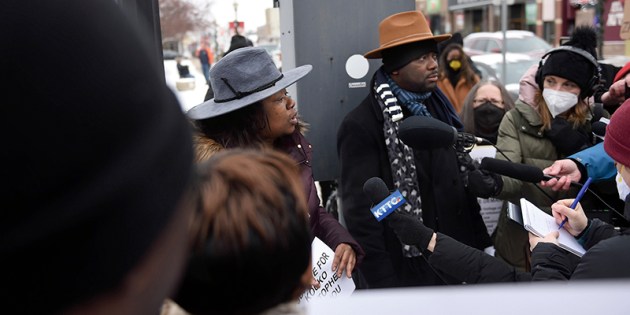 Antranettte Smith and David Kodzode, cousins of Kokou Christopher Fiafonou, speak to the media Thursday during a protest of the shooting and killing of Fiafonou last week by Austin Police officer Zachary Gast. Eric Johnson/photodesk@austindailyherald.com 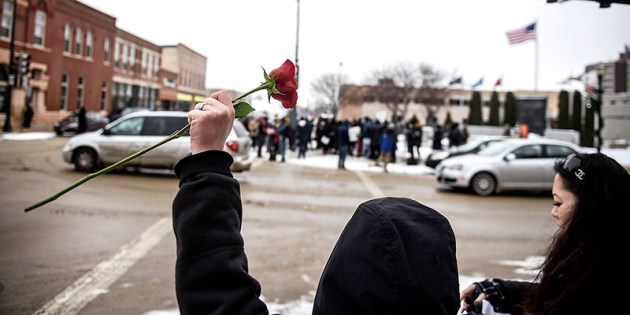 A protestor holds up a single red rose during a protest Thursday of the killing of Kokou Christopher Fiafonou last week, who was shot by Austin Police officer Zachary Gast. Eric Johnson/photodesk@austindailyherald.com 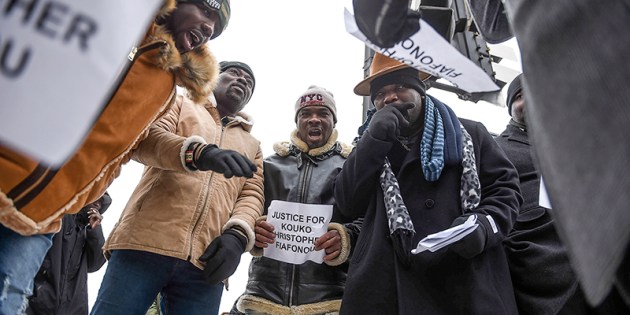 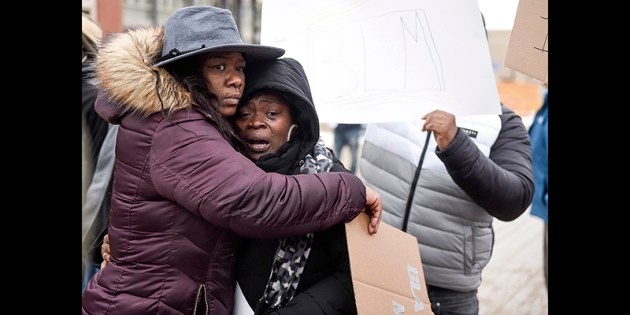 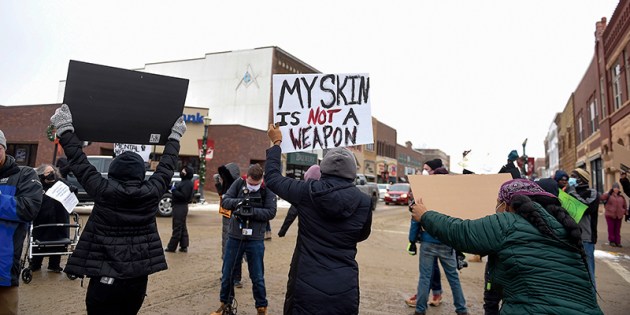 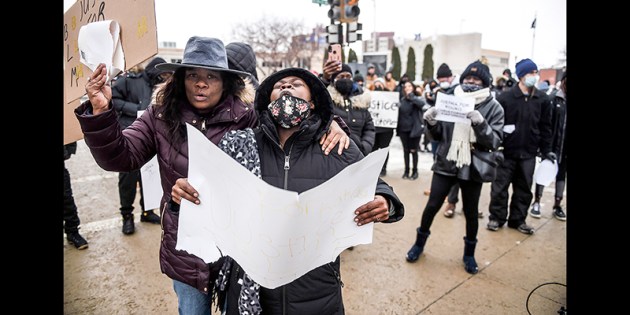 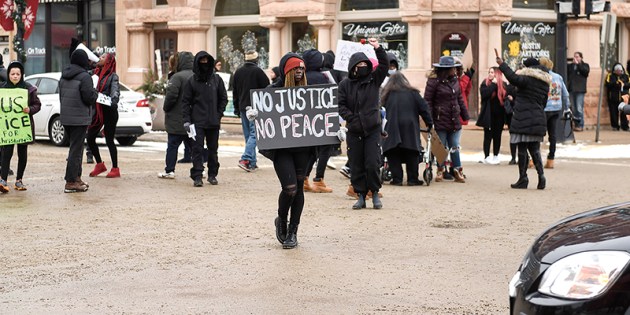 A protester holds a sign in the intersection on Main Street Austin Thursday during a protest for Kokou Christopher Fiafonou. Eric Johnson/photodesk@austindailyherald.com 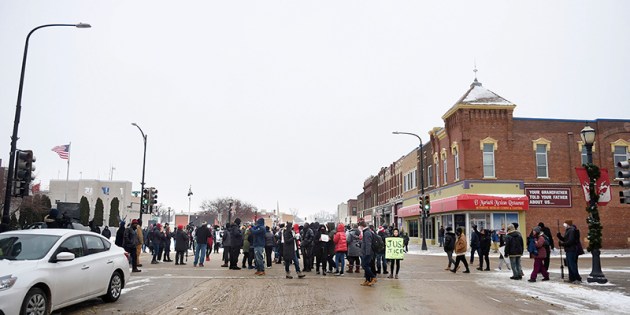 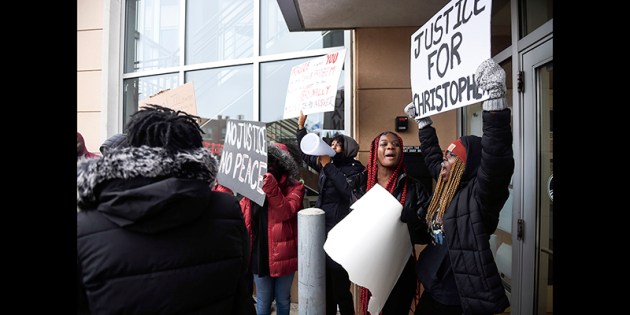 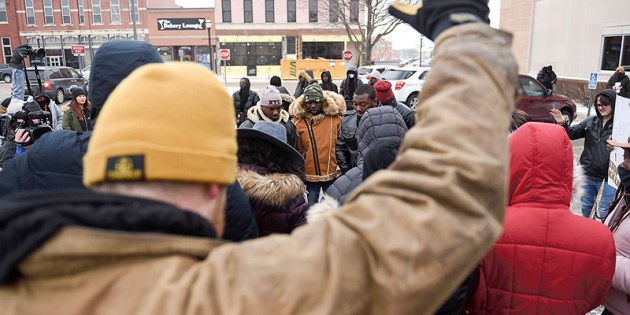 Supporters pray over the family of Kokou Christopher Fiafonou during a protest Thursday in front of the Law Enforcement Center. Eric Johnson/photodesk@austindailyherald.com

Around 100 people gathered in Austin Thursday afternoon near the Law Enforcement Center to protest last week’s killing of Kokou Christopher Fiafonou by an Austin police officer.

Fiafonou was shot by Officer Zachary Gast in the parking lot of Kwik Trip on Dec. 23 following a 24-hour standoff that started on the day before.

The protesters were peaceful, but reflected anger and frustration by supporters of Fiafonou’s family, who say he was doing nothing wrong when he was shot.

Protesters, who at one point spilled onto the intersection of Main Street and Second Avenue Northeast and blocked traffic for a time, chanted “No Justice, no peace … prosecute the police.” The chant at one point was led by Fiafonou’s fiance, Dorothy Gales, who declined to be interviewed.

However, Michelle Gross, who is assisting the family and who operates Community United Against Police Brutality in Minneapolis, said that among the demands of the family is the releasing of any and all video surrounding the shooting.

“If you’ve got nothing to hide, release the video,” she said. “If you did everything right, release everything.”

Fiafonou was shot at around 9:30 p.m. on Dec. 23, after leaving the apartment he had been held up in for 24 hours. Prior to that, on Dec. 22, Austin police were dispatched to the area of Seventh Street and Eighth Avenue Northwest on a report of a man walking in traffic and holding a knife.

According to a press release issued by Police Chief David McKichan on Dec. 24, Fiafonou was discovered holding a machete. After attempting to try and persuade Fiafonou into complying, officers Tased him several times to know avail.

Fiafonou retreated into the apartment, a converted house, where his family was living in the 1200 block of Fourth Avenue Northwest. During that time, police said he had been threatening to hurt other people.

However, Gross and the family disputed this, arguing instead that Fiafonou was a deeply spiritual man and that police had harassed him throughout the standoff all the way through to the shooting.

“There is a big injustice here in Austin, Minnesota,” Gross said. “Christopher was a very spiritual man. All he was doing was minding his own business.”

“He got up early and prayed at the river,” Kodzode said. “He came home and started preaching the gospel.”

Austin police say that officers tailed Fiafonou to the Kwik Trip in the 1200 block of Oakland Avenue. Once there, Fiafonou allegedly confronted officers with a knife. Not long after he was shot by Gast and died moments later as officers attempted life-saving measures while waiting for an ambulance.

The Minnesota Bureau of Criminal Apprehension took over the investigation and named both Fiafonou and Gast earlier this week.

In a press release, the BCA reported that a knife had been found next Fiafonou’s body. It also said that while Austin officers don’t wear body cameras, squad car footage showed portions of the incident, however, that video has yet to be released.

According to the BCA, the investigation of the shooting is ongoing and when completed would send its findings onto the Mower County Attorney’s Office without recommendation.

However, Fiafonou’s family demanded the immediate release of any and all video.

“This is unjust, this is disgusting,” Gross said.

Gross and the family also indicated that pressure will continue to be applied until there is a resolution to their case.

“We get no justice, there will be no peace,” said Antranette Smith, another cousin of Fiafonou.”What’s important is us getting justice.”

The protest lasted from around 2 p.m. until around 3:30 p.m., when it started to disperse. Toward the end, a prayer circle was held so that people in attendance could pray over the family.