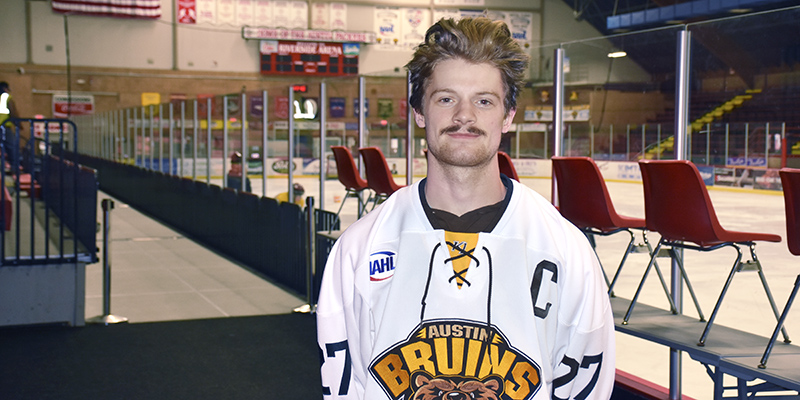 Austin Bruins forward Carson Riddle has been at the front of a Bruins surge that finds them on top of the NAHL Central Division. Rocky Hulne/sports@austindailyherald.com

Bruins are rolling behind the leadership of their longtime forward

Carson Riddle has seen it all in his four years with the Austin Bruins, but he’s never seen the team start like it has this season.

The Bruins (10-3-1-1 overall) are currently in first place in the NAHL Central Division with 22 points. North Iowa is in second place with 18 points. Last weekend, the team scored a rare sweep against the Aberdeen Wings, who won the Robertson Cup in the 2018-2019 season and took second in the Robertson Cup last season.

“Aberdeen was a good testing point for us. We played our best and we walked out with four points. It was exciting,” Riddle said. “It’s been a hot start and we’ve been playing the right game and getting after it. We have that target on our back for being in first place. We want to stay there and we’re working hard to keep it there.”

The Bruins’ Carson Riddle carries the puck through the Bismarck zone during the second period earlier this season. Herald file photo

Riddle, who is from Holly, Michigan, has played 163 career games with the Bruins and he has scored 90 points. He learned what it’s like to ride the bench during his rookie season, he had the season taken away due to COVID-19 in his second season and he learned heartbreak in his third season, when the Bruins missed out on a playoff berth by a small margin.

This season he is sharing his knowledge with the Bruins’ younger crop of players.

“I’ve been through every situation here,” said Riddle, who has seven goals and 11 assists in 15 games. “I’ve gone from not really playing in my first year here to playing 20 minutes a night this year. I’ve been in (the younger players’) shoes before and I can talk to them and give them a heads up on what they’re doing. I’m trying to be a role model and a leader.”

Austin head coach Steve Howard wasn’t sure he would be able to keep Riddle as a Bruin this season, but he’s glad the team was able to retain him.

“We didn’t know if we were going to get Carson back, but with COVID and everything else, he’s having to play his years out in junior hockey, which is good for us,” Howard said. “He knows what our culture’s all about and he’s been a good leader for our guys.”

Austin won by scores of 3-1 and 4-2 in Aberdeen last weekend and each game drew more than 1,600 fans, but the Bruins didn’t spend too much time celebrating. It wasn’t long before Howard had his team thinking about the next series against the St. Cloud Norsemen.

“You’ve got to have a short memory and you’ve got to start looking ahead to the next week. St. Cloud is going to be ready and they’re going to remember when we came from behind in the third period to win the last time we played them,” Howard said.

Austin has a solid group of 10 veteran players and 14 rookies and the team is maturing fast. The one lesson the young Bruins will have to learn throughout the year is pace. The NAHL season is a grind and the players will have to stick with it.

“It’s a grind for sure. We’ve got guys getting on the ice early and they’re excited about being here,” Howard said. “Right now that’s good and we’re working on things, but I worry a bit about getting to January and February. That’s when I try to get the guys in and out of the rink as soon as possible because they know we’ve got to take care of business on the weekends.”

It hasn’t been since the 2018-2019 season that the Bruins have played in the postseason and the last time they played in the Robertson Cup was 2015. The Bruins are hoping this is their year to make a run.

Riddle is going to enjoy the ride and he’s hoping his patience pays off as a longtime Bruin.

“I’ve been lucky to be here for four years,” Riddle said. “It’s been good to be able to develop and hopefully it will help me play in college and we’ll see where it goes from there.”