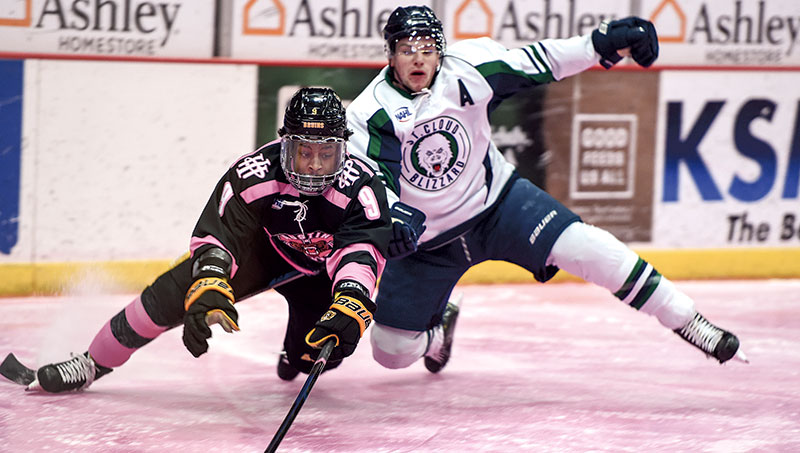 Austin’s Dante Sheriff reaches out of the puck after a collision during the first period of Paint the Rink Pink at Riverside Arena last season. Herald file photo

After a year hiatus because of COVID-19, Paint the Town Pink begins its return as organizers lay out plans

One of Austin’s most celebrated events was, in part, a casualty last year of the COVID-19 pandemic.

People and groups found ways to try and raise money for Paint the Town Pink on some level and with the help of a uniquely held Plunging for Pink in the parking lot of Hoot & Oles, groups were able to raise around half of what might be raised in a normal year.

Pretty impressive, but there was no doubting that PTTP was missed.

“The very fact we raised over half, even in a year where there were no major events … it was encouraging that so many turned out,” said Gail Dennison, The Hormel Institute’s Development and External Relations Director.

Things look very different this year, however, as PTTP’s steering committee and organizations are jumping in with both feet for 2022’s Paint the Town Pink.

So far it’s been a breath of fresh air for everybody. 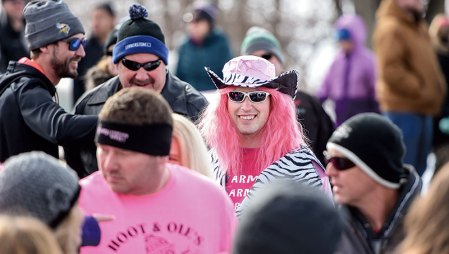 Steve Sampson stands out among the crowd as he gets into the fun of Plunging for Pink in 2020. Photo provided

“The community has already started reaching out and sharing the events they are planning,” Dennison said. “You can sense the excitement that people are ready to keep PTTP going and keep supporting the cause they believe in.”

It’s been a lucrative cause to be sure. To date, PTTP has raised just over $2.2 million dollars for use as internal seed grants for scientists at the Institute.

Those seed grants allow scientists to develop early research that can lead to much bigger grants down the line.

“I wish everybody could hear from the scientists directly how much they appreciate the support of both the spirit of contribution, but also how far the dollars go because of The Hormel Foundation allowing every penny go toward research,” Dennison said.

The Austin Bruins are the forerunners of Paint the Town Pink. It was from their first Paint the Rink Pink in 2010, that PTTP grew to what it has become today. As of February 2020, just before the COVID-19 pandemic settled in, the team had raised over $300,000 in total donations.

Co-owner of the Bruins, Mike Cooper, said the impact of what the team does each year has as much of an impact on the organization as it has on the PTTP effort.

“It’s really fun to talk to the players after the fact,” Cooper said. “It’s a little bit of a growing experience for them.”

But the idea of being able to coat the Riverside Arena ice in pink is also about getting back to something familiar, for both the community and the players.

“We’re excited to be able to get back to some sense of normalcy,” Cooper said. “It’s such a big event for us and a part of who we are. For us it’s exciting to get back to that.”

To really make PTTP successful from the Bruins’ standpoint, it wraps back to making sure the team is as involved as in years past.

It certainly doesn’t hurt to have a hockey team who is seeing a renewed vigor and success early in this young 2021-22 campaign.

After a weekend sweep of Aberdeen, which have commanded the NAHL Central the two previous years, the Bruins are sitting in front of North Iowa at the top of the division with a 10-3-1-1 record. North Iowa has an 8-4-0-2 record.

Groups of people mingle on East Side Lake during Fishing for a Cure. Herald file photo

These two sitting where they are, could set up this year’s PTRP on Feb. 5 to be a vibrant night to say the least.

“We’ve been working closely with the Institute on how we can maybe freshen some things up and get the players a little more involved in the fundraising,” Cooper said. “Hopefully we can play well. Later and later into the season the games mean even more. We’re going up against North Iowa and they are our new rival, so that’s going to be fun. It’s a recipe for a fun night.”

To date, a majority of the major events are currently planned, but as with last year, there is a certain amount of bracing that has to be done.

COVID-19 is still playing its part.

“Every day we watch the news,” Dennison said. “We hope all of these events being plan can take place, but nobody is in charge of what can happen. We’re going to have wait and see if everything can go forward as planned.”

Jan. 11: Business After Hours at The Hormel Institute

• If anybody wants to become involved or plan an event for Paint the Town Pink, they should contact Daneka Wiechmann at 1-507-437-9650 or email pttp@umn.edu.

• For updates on events, visit: www.hi.umn.edu/pttp/

* Events subject to change because of COVID-19

Past Paint the Town Pink Ambassadors