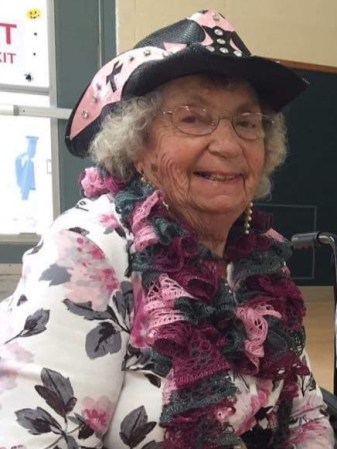 The eldest of four children, Orene was a caretaker by nature. She helped raise her siblings, raised four children of her own, and was deeply involved in Red Oak Grove Circle and Ladies Aid for decades. She was the backbone of her family and her community.

She made it all look so easy that nobody really knows when she found the time to work outside the house, doing jobs that required strength and grit, like detasseling corn by hand or cutting cabbage. Later she worked for Ingvalson Eggs, Morton Appliance, and after retirement, she and Bud ran for parts and hauled vehicles for their son’s business, Vern’s Bikes and Trikes.

She had incredible inner strength and resolve that sustained her while caring for her beloved husband of 64 years through his illness until he passed away at their home, as well as during her own cancer surgeries and treatments. “No need to complain.” She just took care of everything and everyone. She rode her bike through town well into her 80s, mowed her own lawn past 90 and walked surprising distances with her walker – even in the snow – into her waning years. And she did it all while impeccably accessorized.

A funeral service will be held at 2:00 p.m. on Monday, November 15, 2021, at Red Oak Grove Lutheran Church, rural Austin, Minnesota. Visitation will take place one hour prior to the service at the church. Interment will be in Red Oak Grove Lutheran Cemetery, rural Austin. Worlein Blooming Prairie Funeral Home in Blooming Prairie is assisting the family with arrangements. Condolences may be expressed to the family online at www.worlein.com.

Cardinals storm past Warriors to advance to state semifinals