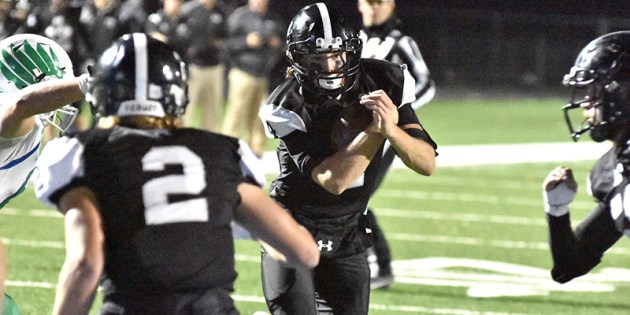 Blooming Prairie quarterback Drew Kittelson scrambles for a two-yard TD run on fourth and goal near the end of the first half against Maple River in the Secton 2AA title game Friday. Rocky Hulne/sports@austindailyherald.com 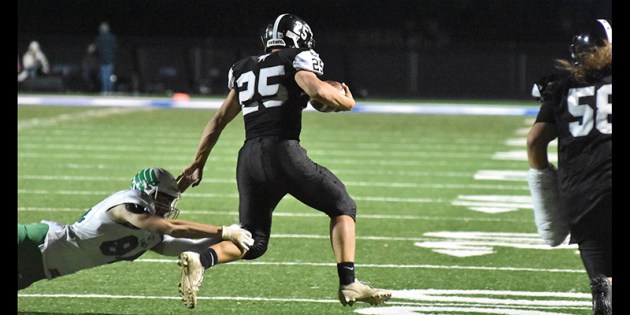 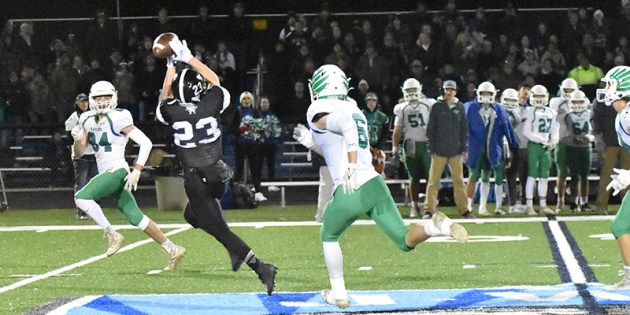 Carson Brennecke can't hang on to a deep ball for BP. Rocky Hulne/sports@austindailyherald.com 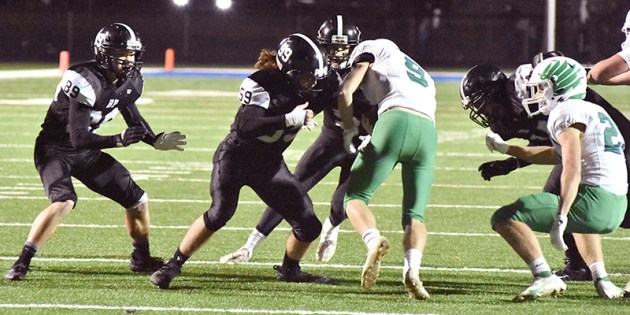 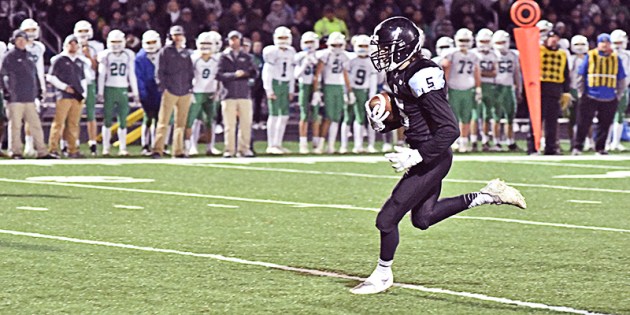 JANESVILLE — The top-seeded Awesome Blossoms couldn’t hold the line as Maple River was able to run behind its big offensive line for much of the night in a 40-18 win over Blooming Prairie in the Section 2AA title game Friday.

The Eagles (10-1 overall) finished with over 400 rushing yards and scored the last three TDs of the game to end BP’s 28-game winnings streak.

“On the defensive side we kind of got things going and we made some adjustments, but halftime they got back on top of us,” BP head coach Chad Gimbel said. “We kind of ran out of adjustments. They’re big and they’re strong and we missed some big plays. That was the game. Unfortunately we got ourselves in a hole where they were able to get in a coverage that was tough to beat.”

BP pulled to within 19-18 when Drew Kittelson scrambled for a 12-yard score on the first possession of the second half, but the Awesome Blossoms struggled to move the ball for the rest of the game. The Eagles took a commanding 33-18 lead when Mason Frank hauled in a 40-yard TD pass from Landon Fox to start the fourth quarter.

Kittelson scrambled for a two-yard TD run on fourth and goal late in the first half to bring BP within a score at 19-12.

The BP defense set up the big drive as it made two defensive stops inside their own 15-yard line on back-to-back possessions while trailing 19-7 to keep the team in the game.

“We weren’t very battle tested until this game and we just didn’t come through,” Gimbel said. “I haven’t had under classmen this broke up after a loss. That tells me that these seniors did a lot of right things. These guys made a lot of plays and they were fun to watch this year. They are great kids.”

Senior Colin Jordison had 64 receiving yards in his final game for BP (10-1 overall). He is part of a group of players who had back-to-back unbeaten seasons and who also brought home BP’s first state title in 2019.

“It all starts with the underclassmen learning the Blossom Way from the upper classmen,” Jordison said. “It started in our freshman year with Seth Peterson, Payton Simon, Trent Swenson and Timmy Wolf. They set a good example on how to be a good leader and how to put your heart and soul into it. We came up short here, but at the end of the day, it’s a game and you’ve got to use these skills for life. Everyone’s got things that are going to happen later in life and you learn very valuable life lessons from this sport.”