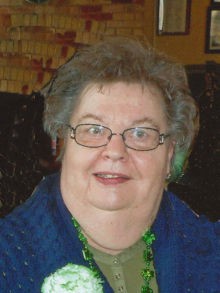 Donna Ilene Doering was reunited with her parents, Melvin and Myrtle (Boyle) Doering, in heaven on October 20, 2021, at the age of 83, after a year-long struggle with stage four kidney disease.

Donna was raised in Austin, MN graduating from St. Augustine High School in 1956 and from UM with a BS degree in nutritional sciences. She first worked as a dietician in Milwaukee and later at St. Mary’s Hospital in Green Bay. Donna shifted careers working in finance administration at the Jackie Nitschke Center and later for Golden House where she met Jay Johnson. Jay would would go on to serve in the U.S. Congress from Green Bay and Donna worked for Jay handling all veteran issues. She would often say that her work for the district’s veterans was the best job she ever had.

Before retiring Donna was the voice on the phone for The Foxy Lady. She was well known for her artistic talents in the crafting field participating in numerous craft shows over many years. Donna opened her home to many feline friends. Her dear Tinker Bell is now enjoying her new home with friends.

Donna reveled in her Irish heritage and treasured her visit to Ireland where she kissed the Blarney Stone.

A private service will be held. Donna will be buried at Calvary Cemetery in Austin, MN.

A special Thanks goes out to Donna’s dear neighbors and friends Bill and Debbie Besaw, who were always there for her. Thanks also to Paul and Barbara Willems for their friendship and to her friends at DaVita Dialysis, on Deckner, for their care